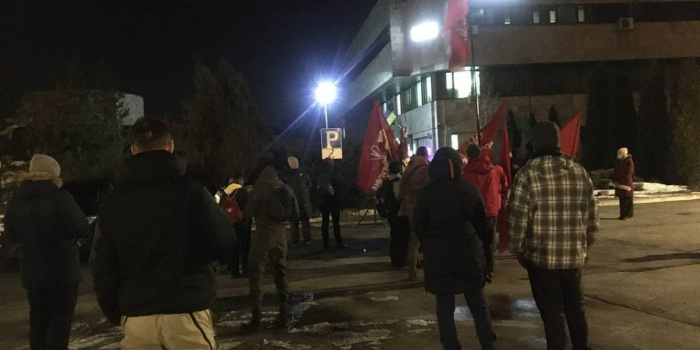 In the evening of February 13, the building of the Suspilne (public broadcaster) was picketed in Kyiv in protest of the results of the national selection for Eurovision-2022, as Suspilne reported.

About 20 people gathered near the broadcaster's building to protest against the victory of singer Alina Pash in the national selection for Eurovision-2022, which will take place in May in Turin, Italy.

The action was organized by the “Democratic Axe” party. The participants of the picket demanded that the SBU to investigate into the violation of the rules of crossing the Ukrainian border by the singer Alina Pash, as well as they called on to launch another the national selection for Eurovision-2022.

"We came here to show that a person who gave performance in Russia during the war cannot anyhow perform on behalf of Ukraine at the international Eurovision platform," said Vladyslav Hrebelnyk, deputy head of Kyiv's “Democratic Axe” branch.

He claimed that Alina Pash had violated the rules of national selection and performed on tour in Russia. In particular, the activist referred to the media investigation into the singer's concert activities.

“Bukvy” conducted a good investigation. They showed her on VKontakte, and it was clear that she was touring in Russia. And, according to the rules established by Suspilne itself, she has no right to participate in the selection, "- said Hrebelnyk.

And Pash's claims that she was a citizen of the world, he considers "smoke and mirrors”.

Bohdana Levytska, a representative of the protesters and a member of the “Democratic Axe” political board, met with members of the NPTU board and reported on the results of the talks.

"We talked for an hour. We are back to the fact that we need a law on collaborationists. Again. This one, with which we came out in 2020, a ready-made document, recently, on October 14, we’ve reminded about it. We must take it up more effectively so that it does not happen again, given all these nuances. And the public has to be involved in discussions and proposals to improve the rules of national selection, "said the activist.

She added that "the commission is willing to cooperate if evidence is provided that Alina Pash crossed the border through Moscow and gave performance there after the 15th, as written in the rules."

“Participant Alina Pash provided guarantees that she did not violate the legislation of Ukraine and the requirements of the competition: the performance in 2015 took place at a private event of Ukrainians in the Crimea, and the border was crossed by Ukraine. The public broadcaster received from the participating team a document on crossing the border with Crimea from Ukraine from the State Border Guard Service of Ukraine, ” the statement reads.