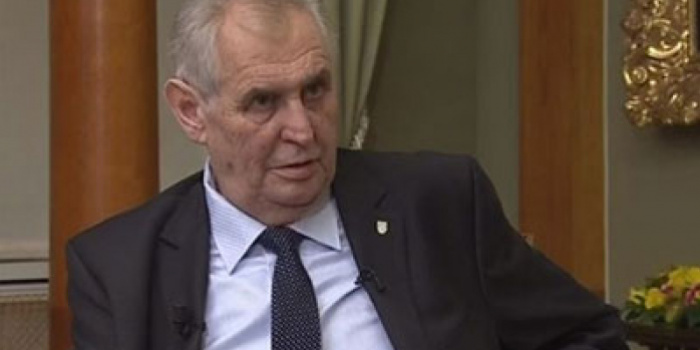 Czech President Milos Zeman's spokesman, Jiri Ovcacek, has denied a report by a pro-Kremlin Crimean Tatar organization that Zeman allegedly recognized Crimea as being "part of Russia," adding that the Czech president's position remains unchanged - "the annexation of Crimea was and is illegal," as Ukrinform reported citing Radio Prague.

The report recalls that a solemn reception on the occasion of the 101st anniversary of the formation of the Czechoslovakia, which took place in Prague on October 28, was attended by the Crimean Tatar group Kyrym birligi (Crimean Unity), known for its loyal attitude to the Kremlin and support for the people of Moscow as opposed to the Mejlis of the Crimean Tatar people, according to Denik N.

While commenting on a statement by Kyrym birligi representatives, Ovcacek refused to answer whether Zeman considered Crimea to be part of Russia. "People have different ideas. I went through the 1980s when we were forced to have one thought. I do not want this time to come back," he replied in correspondence with a Denik N editor. However, later in a comment to the CTK news agency, Ovcacek said that the Czech president's position "remains the same - the annexation of Crimea was and is illegal."

Czech Foreign Minister Tomasz Petricek, in turn, said that he would not "invite such people to events organized by the Foreign Ministry." "However, the presidential administration usually does not agree on an invitation with our agency," Petricek said.

Earlier, the Ukrainian Embassy in the Czech Republic protested against the invitation for a "pseudo-Crimean Tatar organization to solemn events dedicated to the 101st anniversary of the formation of Czechoslovakia." The embassy regarded the move as a provocation aimed at legalizing the annexation of Crimea and damaging Ukrainian-Czech relations.

Ukrainian diplomats also expressed hope that "the official persons and authorities of the Czech Republic, whose government and all the civilized world condemned the Russian occupation of the Autonomous Republic of Crimea, will continue to refrain from any contacts with representatives of the occupation administration and its puppet organizations."