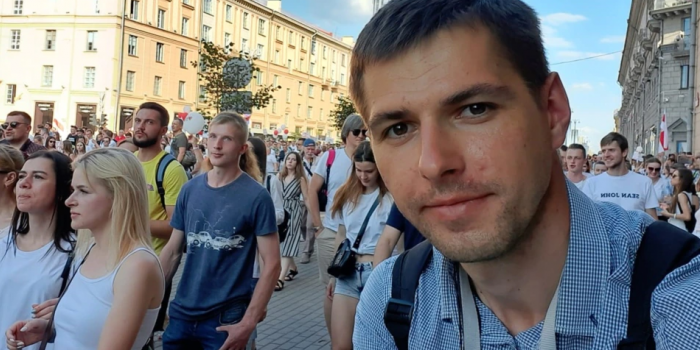 Law enforcement officers conducted a search under Art. 174 of the Criminal Procedure Code of the Republic of Belarus (decisions made on statements or reports of a crime).

According to Roman, they found nothing illegal, nothing was seized.

On April 7, the court will continue considering the administrative case initiated against Vasyukovych over the book "Belarusian Donbass", which the Belarusian authorities recognized as extremist in late March.

The book "Belarusian Donbass" by journalists Kateryna Andreeva and Igor Ilyash was confiscated from Vasyukovych on December 11, 2020, when he was returning from Kyiv to Minsk.

The book was sent for examination, and later Vasyukovych was charged with distribution, manufacture, storage, transportation of information products containing calls to extremist activities (Part 1 of Art. 17.11 of the Code of Administrative Offenses).

Then before the bar, Roman Vasyukovich said that he did not even read the book bought in Ukraine, but bought copies only because the authors had acquaintances. His defense counsel also said that the journalist did not intend to distribute the book.

No decision on his administrative case has been issued yet.

On March 26, a court declared the book "Belarusian Donbass" by journalists Andreyeva and Ilyash extremist.

The book "Belarusian Donbass" was published in the summer of 2020 in Kyiv. Ilyash told DW that this was "an inconvenient truth about the war in Donbass and the role of Belarus and Belarusian citizens in this conflict."

As IMI reported, on December 11, 2020, a journalist of the Nastoyaschee Vremya TV channel (Radio Svoboda and Voice of America project) Roman Vasyukovich was detained at Minsk Airport (Belarus) and then released, his laptop confiscated. He was detained as he was returning from a business trip to Kyiv.

In October 2020, the Ministry of Foreign Affairs of Belarus withdrawn accreditation of journalists of the Nastoyaschee Vremya TV channel, as well as all other foreign media working in Belarus.

On August 7, 2020, three correspondents of the Nastoyaschee Vremya TV channel, Iryna Romaliyska, Yuriy Baranyuk, and Ivan Hrebenyuk, who were covering the presidential election, were deported from Belarus . The current government banned them from entering for 10 years.