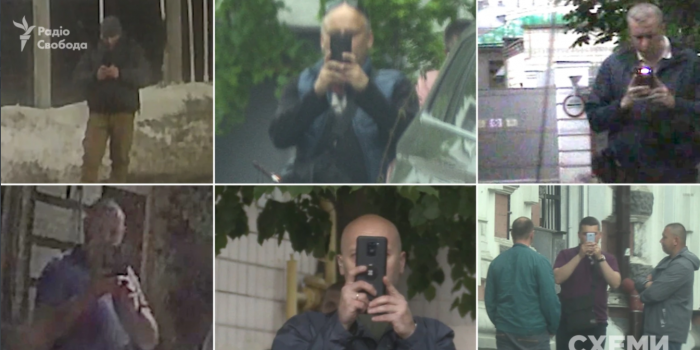 Journalists of "Skhemy" reported that the staff of the Department of State Guard (UDO) has been systematically taking on photos the TV crew of the program when they work. Authorities stress that such filming is legal, but some media lawyers foind it was an attempt to make psychological pressure, as Radio Liberty reported.

About a year ago, journalist Mykhaylo Tkach noticed that the men, who later turned out to be SGD officers, regularly photographed the whereabouts of the “Skhemy” TV crew's car near the President's Office on Bankova Street, as well as at the President's motorcade. During this time, the "Schemes" worked on various journalistic investigations, including those related to private meetings between representatives of Volodymyr Zelensky's team and oligarchs, the president's move to a state dacha, contrary to election slogans, and so on.

“This happens almost every time, the “Skhemy” TV crew comes to the president's office to take photos. “Skhemy” always taking the same cars. The numbers plates and models of the editorial cars of investigative journalists, including the “Skhemy”, are well-known to the professionals who ensure protection of top public officials. This got confirmation from several sources in the state guard system, as the cars of journalists covering the work of the authorities are often in the security zone. What for to take regularly picture of whereabouts of media professionals> Where is that borderline - between security measures to protect the top officials of the state and an attempt to stop journalists? " – the report said.

On several occasions, journalists approached UDO staff and tried to comment on the reasons for the camera crew's photo-fixation, asking if they acted by virtue of some specific order. The staff mostly refused to comment it on. One of them said he "photographed architecture object". Another said he was a "private person" and then went through a checkpoint into a closed area of ​​the President's Office. Another man confirmed that he was an employee of the UDO, but declined to give details.

"Skhemy" asked the Department of Guard State and the Office of the President to explain such measures toward the film crew. The UDO did not deny that the people filmed by the journalists were employees of the department, but left unanswered the question of whether there was a separate instruction to record the whereabouts of the film crew of "Schemes". They noted that employees operated within the law.

"UDO servicemen of Ukraine have the right to conduct film, photography, audio and video recording during security measures in places of temporary stay of officials under state protection. We note that UDO of Ukraine carries out its activities in accordance with current legislation of Ukraine, within assigned tasks and powers, "the department said in response to a request from journalists.

The President's Office provided the “Skhemy” with an identical reply: about the statutory right of UDO employees to conduct surveys, as well as about the compliance of their actions with the assigned tasks and relevant powers.

"The law allows UDO staff to conduct film, photography, audio and video recording at the facilities they guard. And the purpose of this is clear - is to ensure the proper functioning of public authorities and administration. In particular, the President of Ukraine. How? This is already being determined by internal instructions. There probably are some signs that need to be noticed, or it may be someone's instruction based on abuse. The reason for the abuse may be different. And these staff, if they are really staff of the State guard are entitled to fulfil some iorders, that no one is to explain to them, what for this is like that, what for that car is to be taken on photo. They, perhaps, never saw your colleague Tkach on TV, and they are not interested in his person. But they are set a task. There are cars with such numbers - to be photographed", - commented Victor Palyvoda, former head of the personal security department of President Leonid Kravchuk.

The "Skhemy" also asked comment from media lawyers and experts in protection of rights of journalist to evaluate the actions of the staff of UDO.

"The video shows that as soon as the car in which Radio Svoboda journalists arrives, they immediately start taking pictures of the car. And it's not one person, it's several people. That is, we can talk about a certain system. Because there is such a system, this can really be a concern for journalists. Any pressure is bad because it discourages to conduct such complex and high-profile investigations. This means that society will simply not get this important information, will not know about all these secret meetings, etc., and the authorities will be able to hide what she wants to hide ", - said Lyudmila Opryshko, lawyer, media lawyer of the NGO" Human Rights Platform ".

"The point that they are photographing looks quite defiently. It most likely seems to me that it is such a certain psychological pressure," as Roman Golovenko, a lawyer at the Institute of Mass Information said.

In May 2020, Volodymyr Zelenskyi publicly commented on the work of journalist Mykhaylo Tkach as part of the film crew of the "Skhemy" program. "Every day or almost every day, I don't want to blame anyone, he is always on duty as a UDO. I even think the state should remunerate, because it's a lot of work and a lot of work," Zelensky said.

Later, on the second anniversary of his presidency, Volodymyr Zelensky, answering Tkach's questions about the president's team's private meetings with the oligarchs, said: "There is a result. I think it is. If you don't see it, you should follow it, not the cars, when they leave the president's house and when they come to work. I think it's more important. "

One week after the press conference, on May 27, Tkach and the TV crew of "Skhemy" recorded how non-affiliated to any party MP Vadym Novynsky visited the President's Office in private as an oligarch. Novinsky left the territory of the President's Office in a car with license plates attached to another car (with so-called cover numbers) and moved to his armored "Mercedes". After that, Bankova confirmed that Novynsky was talking to the adviser to the head of the Office, Mykhailo Podolyak.