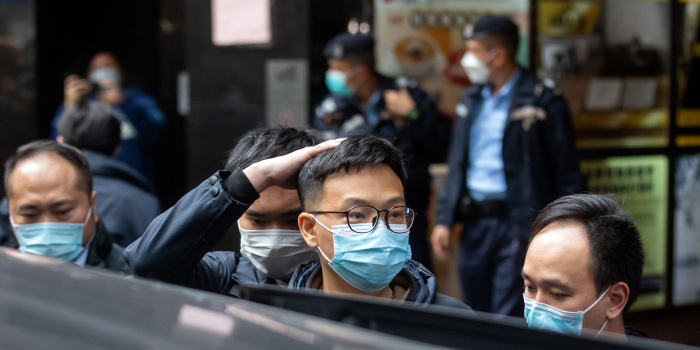 Editor-in-chief of Stand News Patrick Lam Shiu-tung. Photo credits: Paul Yeung / Bloomberg via Getty Images
Hong Kong independent media Stand News has announced its shut down following the arrest this morning of six current and former members of its team, as Reporters sans frontières reported.
Reporters Without Borders (RSF) urges for the release of all journalists detained and calls on democracies to react and defend what is left of the free press in the territory.

Simultaneously, a total of 200 police officers raided the Stand News office and searched the house of Stand News’ deputy assignment editor, Ronson Chan Long-sing. Chan, who is also the chairman of Hong Kong Journalists Association (HKJA), was taken away and later released after questioning.

"Exactly six months after the dismantling of the Next Digital group and its flagship newspaper Apple Daily, Hong Kong Chief Executive Carrie Lam once again shows her determination to terminate press freedom in the territory by eliminating Stand News in a similar fashion", says Cédric Alviani, Reporters Without Borders (RSF) East Asia bureau head, who calls for the release of all journalists and urges democracies “to act in line with their own values and obligations and defend what’s left of the free press in Hong Kong before China’s model of information control claims another victim”.

Stand News, an independent, non-profit, news website in Chinese founded in 2014, provided in-depth coverage of all trials related to the National Security Law, and was a nominee for the 2021 RSF Press Freedom Awards.

In June, Hong Kong’s chief executive, Carrie Lam, also used the National Security Law as pretext to shut down Apple Daily, the territory’s largest Chinese-language opposition newspaper, and to prosecute at least 12 journalists and press freedom defenders, ten of whom are still detained.

In a report titled The Great Leap Backwards of Journalism in China, published on 7th December 2021, Reporters Without Borders (RSF) revealed the system of censorship and information control established by the Chinese regime and the global threat it poses to press freedom and democracy.