Since March 1 till November 30, in Ukraine there were 709 registered facts of violation of journalists’ rights, of them 194 took place in Donetska oblast, and 89 in Luhanska oblast. This is the data of the Institute of Mass Information monitoring «Freedom of press Barometer».

In total for this period, IMI experts registered 132 cases of beating of journalists, 128 facts of censorship, 115 cases of obstruction to lawful professional activities, 75 kidnappings or illegal detentions of journalists, 70 cases of threats and intimidations, and 59 cases of attacks against mass media offices. Also, within this period six journalists were killed in the conflict zones.

In November, the largest number of violations was registered by IMI experts in the category «threats, intimidation» — 10 cases, also, obstruction to lawful journalist activities — 5 cases. In this month, one case of illegal detention of journalist was registered. The nuance of this case is that it happened not in Crimea or in the East of Ukraine, but in Ternopil.

As IMI expert Kateryna Diachuk said, in the last two months, IMI has registered no cases of journalists being captured by fighters of so-called «DPR» and «LPR». Still, «LPR» has been holding captive Luhansk journalist Serhiy Sakadynskyi and Kharkiv journalist Roman Cheremskyi for over 100 days.

«Decline of the number of cases of journalists’ rights violation in the East of Ukraine in the last two months is due to the fact that many journalists have left the occupied territory. Still, violations take place in other regions, in particular, in Kyiv, Kherson, Dnipropetrovsk region, Odesa, Kharkiv. Cases of threats, intimidation, assaults and impediment remain unpunished, notwithstanding the criminal cases started by law enforcement agencies. Overcoming the impunity for attacks against journalists and protection of the society’s right to obtain information must be one of the major issues on the government’s agenda», Kateryna Diachuk emphasized.

FYI: Institute of Mass Information conducts monthly monitoring of freedom of press in the following categories: physical aggression, censorship and access to information, economic and political pressure, legal pressure, and cyber-crimes against mass media and journalists. Monthly report includes only the cases related to freedom of press and professional journalist activities. 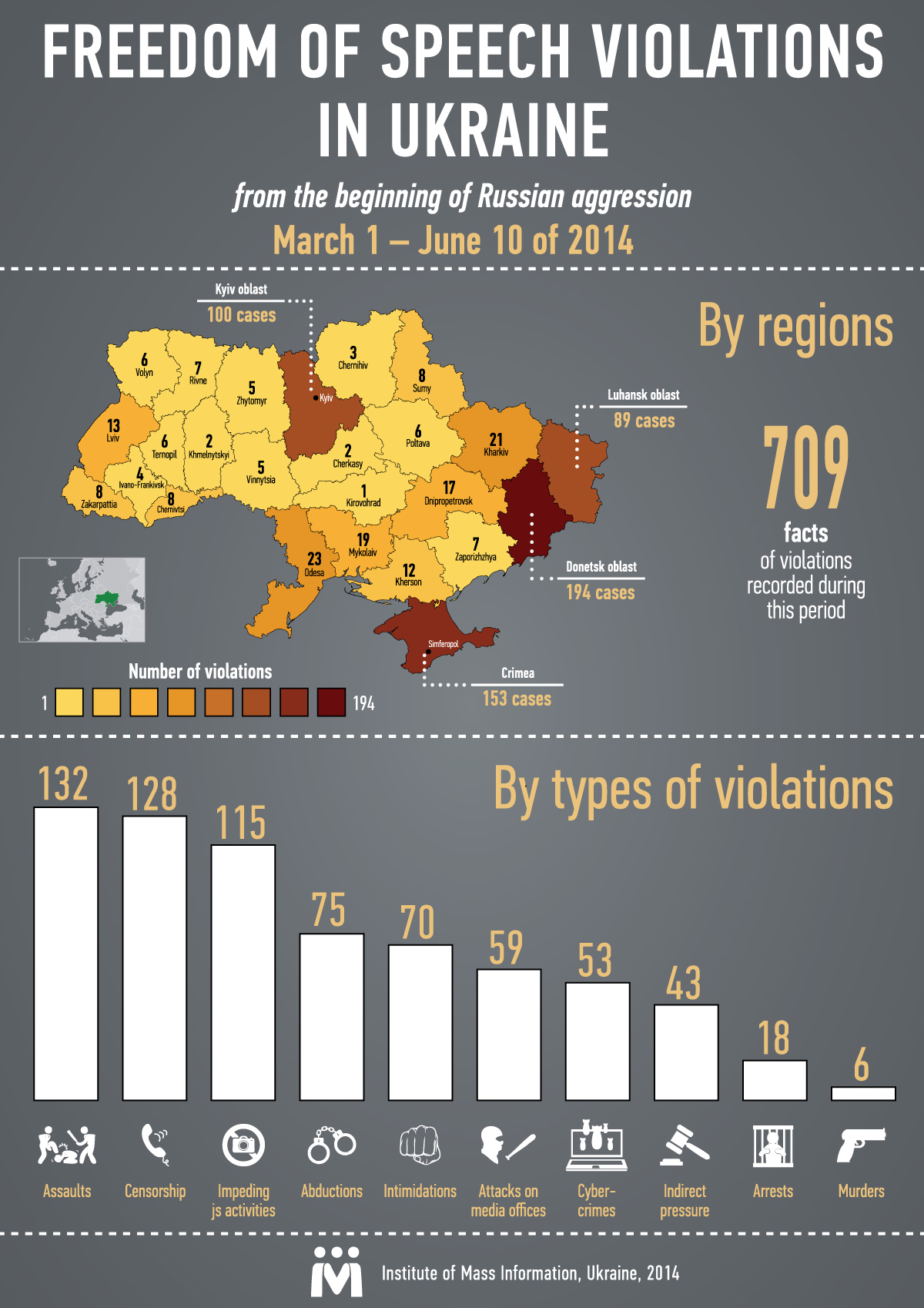