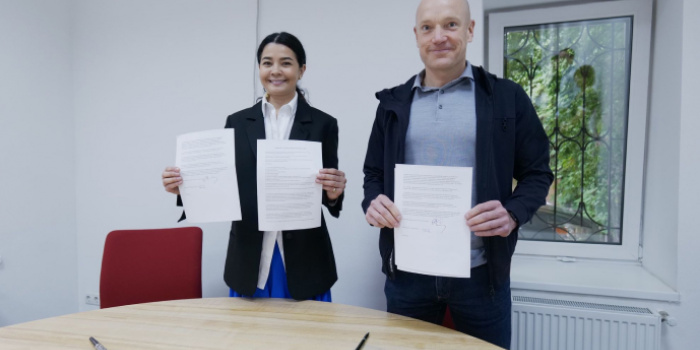 Editor-in-chief  of “Ukrayinska Pravda” Sevhil Musayeva and CEO of “Dragon Capital” Tomas Fiala, who bought 100% of the publication's corporate rights , signed an editorial agreement, as UP reported.

The parties agreed that the publication's editorial policy and operational principles will remain unchanged.

The edition made public the editorial agreement:

Editorial agreement between the owner and the UP team

The online publication “Ukrayinska Pravda” was founded in April 2000. This is one of the oldest and most respected Ukrainian mass media.

The singularity of the UP is that it was founded and managed by journalists from the first day of its work.

Our editorial staff has always been guided by the Principles and Rules of Honest, Critical and Independent Journalism.

-Responsibility for the accuracy of the information disseminated by our publication.

-Protect your sources of information.

These rules will remain unchanged for the publication staff. These principles must also be inviolable for the owner of UP. The interests of our reader will always come first for the editorial board of the UP.

We also want to approve a few important points of interaction between the editorial office and the owner:

-Editorial decisions, including taking down or modifying publications or pre-publication versions of journalistic pieces, should not be made in favor of advertisers or business partners to update or correct inaccuracies. This restriction should in no way be interpreted as restricting commercial and business development initiatives.

-The editorial board of “Ukrayinska Pravda” will make every effort to protect the editorial authority of the edition, the independence of the content of the publication on all platforms, the impartiality of employees and to ensure high-quality editorial control over compliance with principles and rules.

-In news and editorials mentioning the owner of “Ukraynska Pravda”, we leave a mention of him and titrate him as the owner of UP.

-The editorial office reserves the right to cover the activities of the owner of the edition and its affiliated legal entities and individuals in any chosen editorial format (including journalistic investigations), if such activities are in the public interest.

-The editorial board undertakes to adhere to the principle of balance of opinions, objectivity and impartiality in editorial texts, including those that have any relation to the interests of the owner of the UP.

As IMI reported, on May 26, “Ukrayinska Pravda” reported that the Dragon Capital group of companies, headed by Tomas Fiala, had bought 100% of the corporate rights to the edition and all its assets.