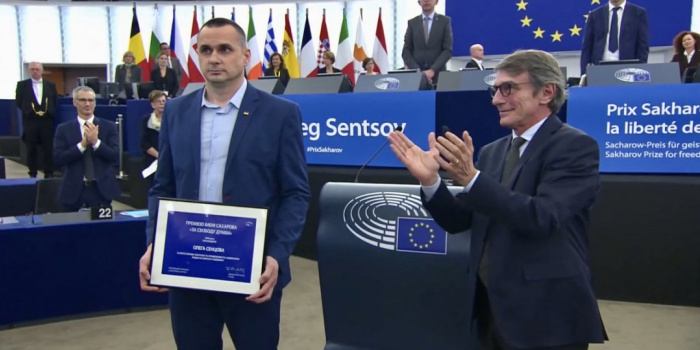 Oleg Sentsov, a Ukrainian filmmaker and former Kremlin prisoner, personally accepted the Sakharov Prize for Freedom of Thought, which was awarded to him in October 2018, as Ukrinform reported.

“I congratulate the Ukrainian film director, writer, who was awarded the Sakharov Prize in 2018... He paid a very high price for his courage," said David Sassoli.

Sentsov, in his speech to the European Parliament, stressed that he accepts this award not for himself, but for all political prisoners held in Russia.

Sentsov, who was sentenced in Russia to 20 years in prison on charges of preparing terrorist attacks in occupied Crimea, was awarded the Sakharov Prize for Freedom of Thought in October 2018.

Sentsov's cousin sister, Natalia Kaplan, and lawyer Dmytro Dindze accepted the prize in the filmmaker's name at a ceremony in Strasbourg.

On September 7, 2019, Ukraine and Russia exchanged detainees in the "35 for 35" format. Eleven Ukrainian political prisoners, including Sentsov, as well as 24 seamen captured by Russia in the Kerch Strait in November 2018, returned home.