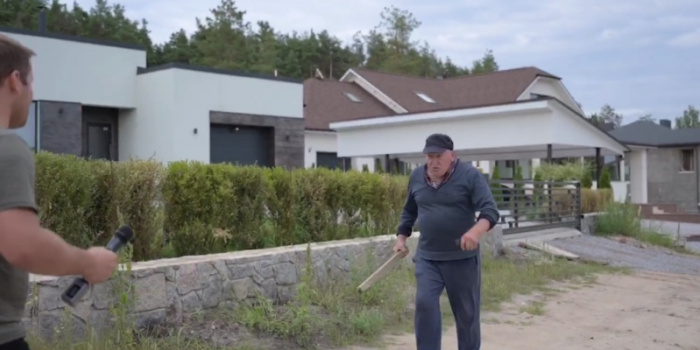 In Zhytomyr, on August 19, a security guard of private single-family homes on the Teteriv River embankment attacked journalist Oleksandr Kryzhanivsky who was filming  a story for “Anti-rating” journalistic investigation program. The prosecutor's office initiated proceedings. This was reported on the website of “Antirating” edition.

In a comment to Zhytomyr.info, Oleksander Kryzhanivsky said they were taking on video the house of the deputy of the city council and the chairman of the budget commission Yuriy Moiseyev.

"We came to film a story for a program on developments on the banks of the Teteriv River. We learned that the city council deputy and chairman of the budget commission Yuri Moiseyev lives in the house. This information was confirmed to us by a security guard. We also spoke kindly with a neighbor, Leonid Krieger. At first, the security guard did not interfere with filming, but when we talked on the phone with one of the owners, the man rushed at me first yelling something in a strong language and attacked me with his fists and then with a club. I did not call the police, I posted the message on that incident on my social networks, after which I received a call from the prosecutor's office and was told that the case had been opened. Speaking by phone, Yuriy Moyseyev confirmed me that he lived in the house we were filming about two months”, the journalist said.

The Zhytomyr District Prosecutor's Office instituted a criminal proceedings for threatening journalists with violence (Part 1 of Article 345-1 of the Criminal Code of Ukraine).

"It has been established that during the filming of a story for a project of journalistic investigations about some private buildings along the Teteriv River embankment, journalists were threatened with physical violence by a security guard. The incident was recorded on video and posted on the Internet. The Zhytomyr District Prosecutor's Office exercises procedural control on the case. " – the  prosecutor's office said.