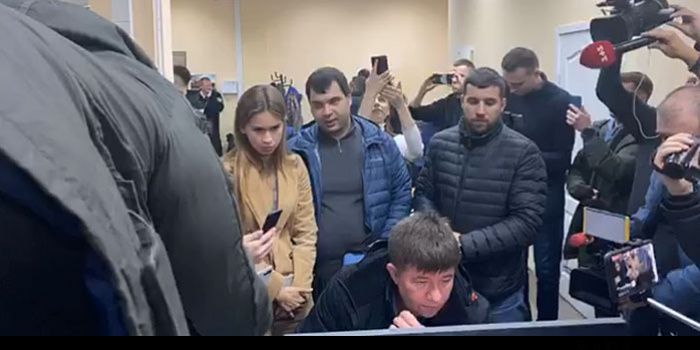 Photo credit: Screenshot from the video taken by Volodymyr Tymofiychuk

Journalists have launched own investigation into a wiretap effort targeting the prime minister, as UNIAN reported.

The team of the 1+1 TV channel's projects whose offices and homes were earlier raided by the Security Service of Ukraine as part of the investigation into a leaked audio of prime minister Oleksiy Honcharuk's meeting with cabinet officials say they had obtained the tapes from open sources, in particular, from YouTube, and refuted allegations of being involved in doing the original recording.

That's according to Maksym Shylenko, head of the journalistic projects department at 1+1 Media.

Speaking at a Pravo na Vladu [Right to Power] panel show on Thursday, Shylenko assured that the journalists working for the investigative project have no special wiretapping devices at their disposal.

"Of course not," Shylenko said, answering the host's direct question on whether 1+1 journalists eavesdropped on the prime minister, adding that "we really would like to have such means to record anyone – prime minister or whoever – but we don't have such devices. And the SBU is well aware of that."

Commenting on where he journalists had got the recording, Shylenko replied: "Our journalists say they had obtained this recording from YouTube or from the internet, like everyone else."

Also, Shylenko stressed numerous violations during the raid, fixed by 1+1 lawyers and subject to further appeal.

Commenting on the possible pretext behind the SBU raid, Shylenko suggested "pressure on certain MPs with the Servants of the People party who don't want to vote on certain issues."

This version "immediately comes to mind", Shylenko said, adding that there are also "complex ones".

"I can only speculate now. This, for example, could be to distract people from the land [market] issue, which is very scandalous and which they are trying to lobby through parliament. There are a lot of issues. It's direct blow to one of the deputies with the Servant of the People," he added, stopping short of naming the MP.

Shylenko said journalists of the Ukrayinski Sensatsii [Ukrainian Sensations] project had already launched their own investigation to find out who wiretapped the prime minister's meeting.

On February 5, the Security Service of Ukraine carried out searches at the headquarters of the 1+1 Media Group in Kyiv and homes of three journalists: Denis Danko, Yevhen Kuksin, and Oleksandr Nizovtsev, as part of the probe into the illegal wiretapping of Ukrainian government officials. "Two of the journalists are employees of the journalistic investigations department, and one has long stopped working for 1+1," said Maksym Shylenko.