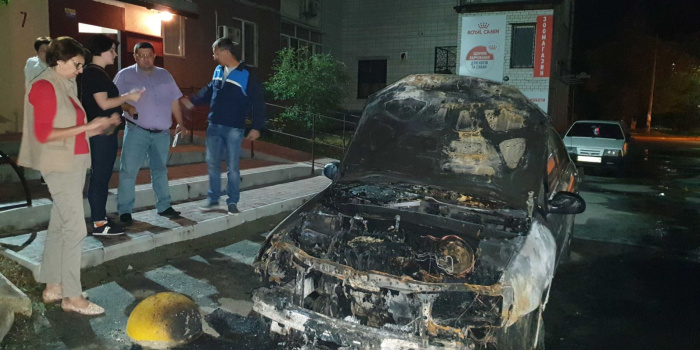 On the night of August 17th, in Brovary (Kyiv region), some unknown people set fire to the car of the journalistic investigation program “Skhemy” (Schemes), which belongs to the driver of the program Borys Mazur, as Natalya Sedletska, editor in chief of the program on Radio Liberty, told it.

The incident occurred at about 00:30 under near the driver's house.

“The car of the employee with "Skhemy" investigation program has been burnt. Borys Mazur is our constant driver and a constant member of the film crew. It happened just outside his house in Brovary at half past one on the first night, the car is beyond repqir, ”Sedlecka said.

The investigative team inspected the scene.

Natalya Sedletska stressed that the arson was related to the professional journalistic activity of "Skhemy",  "which someone doesn't like very much".

“Obviously, about a year ago Andriy Portnov made public all the personal data of our drivers: their passports, license plates, residence addresses - and threatened the editorial office. The National Police even has a criminal case on this regard, with no progress however. And last Friday, Portnov once again posted this: "Marginal Radio Svoboda, I go on with a set of disciplinary measures," Sedlecka wrote.

At the same time, she said, "it is hardly to be limited by only such a scenario."

“This car is very well known to a wide range of persons of interest in the stories we make. This car was, in fact, our service tool, by means of which we had filmed a large number of journalistic investigations, the editor-in-chief of “Skhemy” said.

Lawyer Volodymyr Shchyhol, who went to the scene, said that there was a roar, "which gives grounds to claim that it was the arson." "Later, during the inspection, it was found out that, most likely, the arson took place on the left side of the front wheel," he said.

According to the lawyer, forensic scientists took samples of the substance which the car of the employee of "Schemes" was probably set on fire with.

"Chemical samples taken at the crime scene will be sent for examination and it will be established with which substance the arson was carried out. And then the investigation will establish the origin of the substance and so on, - explained Shchigol and added: - Given the fact that this car had constantly been used for professional journalism, obviously, there is, in addition to the destruction of property, also obstruction of journalism, which is also a criminal offense. The investigator now has 24 hours to determine his qualifications, enter information into the National Register of Pre-Trial Investigations and to direct the investigation properly. ”

As IMI reported, on August 8, Mykhaylo Tkach, journalist with “Skhemy” (“Schemes: Corruption in Details”) program, said he noticed some signs indicating that a bug device has been installed inside his home.