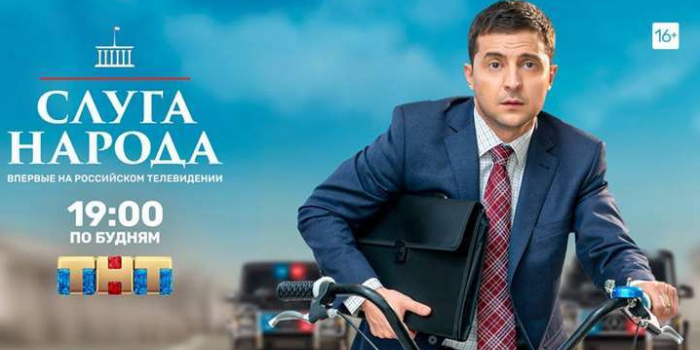 Russian TV channel TNT has pulled Ukrainian President Volodymyr Zelenskiy’s Servant Of The People sitcom off the air after showing the first three episodes of the first season on December 11, as Radio Free Europe/Radio Liberty.

Programming for the show, in which Zelenskiy plays the main role of a history teacher who unexpectedly gets elected president, then changed for December 12-13 during which other comedy series are scheduled to air in the same time slots.

The move by the TV channel, which is owned by a subsidiary of the state-owned gas company Gazprom, came two days after Russian President Vladimir Putin said there appeared to be a "thawing" in relations with Kyiv, following his first face-to-face meeting with Zelenskiy in Paris to find a lasting peace in the eastern Ukrainian conflict.

In its promotional ad for the show, the state-connected media company told its 35 million weekly viewers several preemptive words: "The show is the utopia that has nothing to do with Zelenskiy’s Ukraine."

Before the plug was pulled, viewers in Russia’s earlier time zones in the Far East reported on social media of being able to watch an uncut version of the comedy show.

Later in the day, viewers in the European part of Russia, including Moscow, noticed a scene was cut in the first episode where Zelenskiy’s character names a luxury Swiss watch brand whose pronunciation sounds like a crude Russian obscenity that some critics use to describe Putin.

TNT told local media that it had never planned to air all the show’s episodes despite what was advertised, saying its decision was a "marketing ploy."

Servant Of The People was scheduled to start airing on the popular Russian online streaming platform Premier on December 12.

The first season of the show was released in Ukraine in 2015 and Zelenskiy was elected president in May 2019.

His Servant of the People party won an outright majority during parliamentary elections later that year.