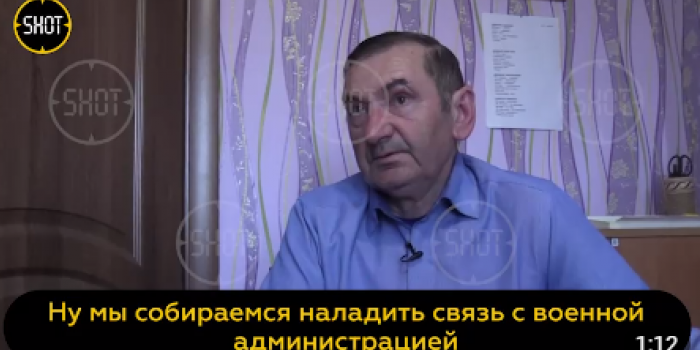 Photo – screenshot from the video

Russian propagandists issued an "interview" with the editor of the media website "Nova Kakhovka city" Oleksander Hunko, whom they had abducted and were holding captive.

The video was posted on one of the propaganda Telegram channels.

The propagandists called everything happening in the video a "prophylactic talk." During the "interview," the journalist states that he "had been deceived by the Ukrainian propaganda," but is now "ready to write the truth – to work with the civil-military administration and to publish impartial information about the restoration of peaceful life in the Hersonska oblast."

Everything said by Hunko has been undermined by a Nova Kakhovka journalist Oleh Baturyn.

"The Russian occupants forced the chief editor of the 'Nova Kakhovka city' website Oleksander Hunko to take part in the filming of a staged video report for Russian propaganda dumpsters. In this video he states that he 'is now ready to write the truth and to work with the so-called civil-military administration.' This is the first time in my life that I hear Oleksander Hunko speak in such an uncharacteristic manner. I see beating marks, carefully hidden by the makers of this video. I can imagine what he had to go through during his captivity," wrote the journalist, who himself had been captured by the Russians, in his Facebook post.

We remind that on April 3 the Russian occupants had abducted a local journalist and author, the editor of the media website "Nova Kakhovka City" Oleksander Hunko, and took him to an unknown location. The Russians had released him on April 6.