russian propagandists film the "successful operation" of the seized ZNPP 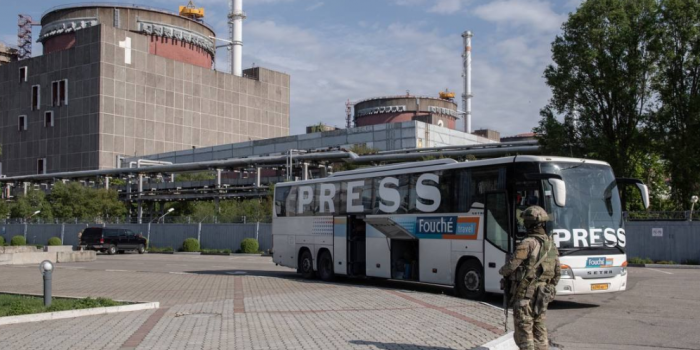 The russian occupiers staged a provocation at the seized Zaporizhzhia NPP involving propagandists to create a picture of ZNPP's "successful operation" under their control.

"To create a good propaganda picture about the ZNPP's safe operation at the occupiers' gunpoint, the ruscists resorted to another provocation. The russian military forcibly made the plant's management allow a well-known russian propagandist blogger, accompanied by a Rosatom represtentative and some armed soldiers, to the control block of one of the nuclear plant's power units and to other limited access rooms. There, they plan to organize filming and force Ukrainian personnel to participate in propaganda interviews.

"This is how the occupiers are creating a propagandist myth about one of russia's main achievements in this war – the successful operation of the stolen ZNPP to the aggressor country's benefit – for the russian audience," Enerhoatom noted.

However, the company notes, despite the "russian bastards' efforts, the ZNPP remains under the control of NNPGC Enerhoatom and supplies electricity to the Ukrainian power grid, expecting to be liberated as soon as possible with the help of the Armed Forces."

The corresponding note about russia's criminal actions at the Zaporizhzhia nuclear power plant will be sent to the international NPP security bodies.

We remind you that the Zaporizhzhia NPP has been under occupation since March 4, but Enerhoatom continues to control the use of the ZNPP.