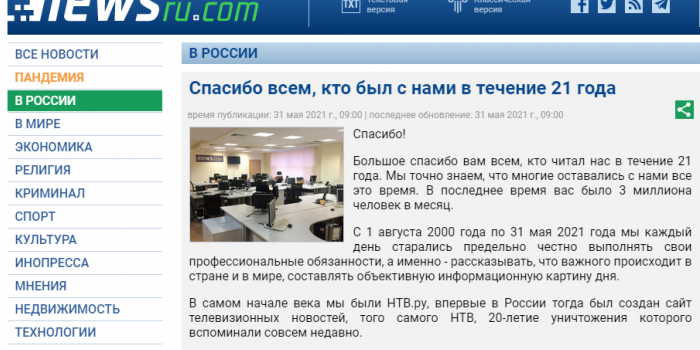 The Russian online media outlet NEWSru has announced its closure, blaming the country's current "political situation," which has made it economically impossible to function, as advertisers shun independent sources of information, as Radio Free Europe/Radio Liberty reported.

NEWSru, which has functioned primarily as a news aggregator in recent years, said in a statement on May 31 that regulations requiring media in Russia to label anyone the state regards as "extremists" or "foreign agents" when referencing them in their articles was increasingly impacting its bottom line.

"We are stopping work for economic reasons, but they are provoked by the political situation in the country," the Moscow-based newsroom said on its website.

NEWSru began operations in 2000, the year President Vladimir Putin started his first term in the Kremlin.

The company said that the turning point came seven years ago as both Russian foreign policy and the domestic economic structure changed dramatically.

Moscow seized Crimea from Ukraine in early 2014 and weeks later threw its support behind separatists in Ukraine's east, where some 13,200 people have been killed in an ongoing conflict.

"Our picture of the day became so different from the picture favored by state [media] resources that major advertisers stopped cooperating with us after the events of 2014, while others began to be particularly wary this year," NEWSru said.

The site opened as an Internet news portal for NTV in August 2000. When the channel became part of Gazprom-Media, the website remained under the control of Russian tycoon Vladimir Gusinsky and changed its domain name to NEWSru.com.

NEWSru said Russia's recent declaration of several news outlets -- including Radio Free Europe/Radio Liberty, the Meduza media portal, and the VTimes news site -- as "foreign agents" had impacted media and made it a possible target for the restrictions as well.

"We had to label more and more respected people and sources of truthful information as foreign agents and extremists. The current situation in the economy and in the legal field makes the high-quality work of NEWSru.com impossible," the company said.

Russia's so-called "foreign agent" legislation was adopted in 2012 and has been modified repeatedly.

It requires nongovernmental organizations that receive foreign assistance and that the government deems to be engaged in political activity to be registered, to identify themselves as "foreign agents," and to submit to audits.

The law, which has been further expanded to include individual reporters, is one of several Kremlin-backed measures aimed at restricting foreign-funded activities in Russia.

A parallel measure known as the "undesirable organizations" law has forced the shutdown of a number of nongovernmental civil society groups in Russia, mainly from Europe and the United States.

NEWSru said that the news archive it accumulated over 21 years will remain open and accessible to the public.

"News from the recent past, without unnecessary interpretations and comments, convincingly shows how our recent history has evolved. It will not be possible to 'clean up' this history, no matter what resources the state is now spending to do so," it said.

Missing journalist in Ternopil found dead in hospital
Blogs
Sanctions against Medvedchuk’s TV channels. The first estimates
Do you want to be first to learn about the new research of the Institute of Mass Information? Subscribe to the newsletter!