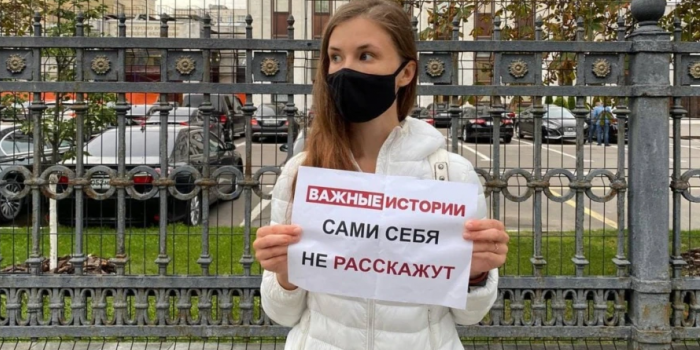 Russian police have detained three journalists as they protested outside the Justice Ministry against the government's widening crackdown on media outlets., as Radio Free Europe/Radio Liberty reported.

The September 8 detention of the three, from the online news site Vazhniye Istorii, comes amid mounting fears about the ongoing Kremlin campaign to squeeze independent journalism in Russia ahead of this month's elections.

Vazhniye Istorii is among dozens of media outlets and individual journalists that have been labeled "foreign agents" under a decade-old law. The designation carries ominous Soviet-era connotations, and comes with onerous labeling requirement that have threatened the financing of some media outlets.

The three -- identified as Alesya Marokhovskaya, Polina Uzhvak, and Irina Dolinina -- picketed outside the Justice Ministry, calling on the authorities to abolish the law. They held up small placards reading, "There are no foreign agents, there are journalists."

Video from the independent TV station Dozhd, which has also been designated a "foreign agent," showed police detaining the three and escorting them into a police van.

Vazhniye Istorii had no immediate comment on the detentions.

Dolinina and Marokhovskaya are among the 47 media entities and individual reporter now designated by the Justice Ministry.

Radio Free Europe/Radio Liberty and several of its Russian-language publications have also been designated as "foreign agents."

The picket coincided with a wider campaign launched earlier on September 8 by many of Russia's leading independent media outlets against the "foreign agent" law.

The publisher of another media outlet that released investigative reports on alleged corruption and abuses by top government officials was labeled with a similar designation: "undesirable."

Two other news outlets shut down after authorities accused them of links to "undesirable" organizations.