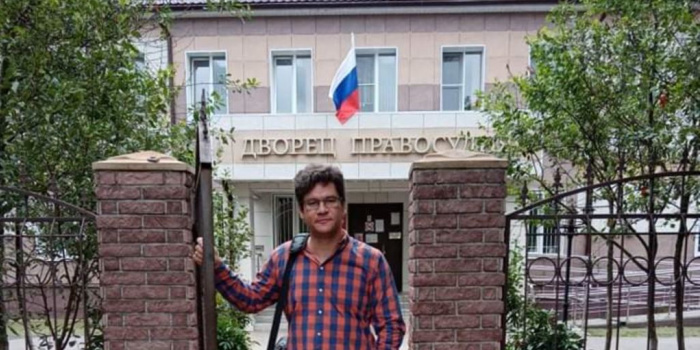 A court in Russia's Volga Federal District has fined a journalist for spreading "false" information about the coronavirus after he criticized a church's religious gatherings for being superspreader events.

The Bogorodsk city court on November 11 found Aleksandr Pichugin guilty for his post on Telegram where he criticized an Orthodox church for holding a religious gathering for its parish amid the coronavirus pandemic, calling the service "a planned action to infect people with a deadly disease."

The court convicted Pichugin of "posing a threat to citizens' lives and health" and ordered him to pay a fine of 300,000 rubles ($3,920). Prosecutors had asked the court to sentence the journalist to 2 1/2 years in prison.

Pichugin's lawyer Tumas Misakyan said the ruling will be appealed.

Ahead of the November 11 verdict in the central Russian city of Nizhny Novgorod, the Committee to Protect Journalists (CPJ) said Russian authorities should stop harassing and pursuing legal action against Pichugin over satire, as Radio Free Europe/Radio Liberty reported.

“Authorities should drop all the charges against journalist Aleksandr Pichugin, and ensure that no one faces criminal convictions over their commentary on events of public interest,” said Gulnoza Said, the New York-based media rights group's Europe and Central Asia program coordinator.

Pichugin said the post reflected his exasperation with the church’s failure to comply with coronavirus restrictions. He also said he published the post after the governor of the Nizhny Novgorod region asked him and other bloggers to use their influence to encourage people to follow COVID-19 restrictions.

Pichugin's lawyer had argued that the case would discourage journalists from discussing sensitive topics.