On November 27, the website of the online publication "Detector Media" suffered a DDoS attack. The publication reported this on their Telegram channel.

"Russian hackers are attacking our site again. We are doing everything we can so that you can open the site," the editors wrote.

The cyber attack began in the evening after the "Narodnaya Cyber Armiya" Telegram channel posted a message proclaiming the DM website as the chosen "new target".

As IMI reported, the Russian group NoName057(16) carried out a DDoS attack on Detector Media on April 22. 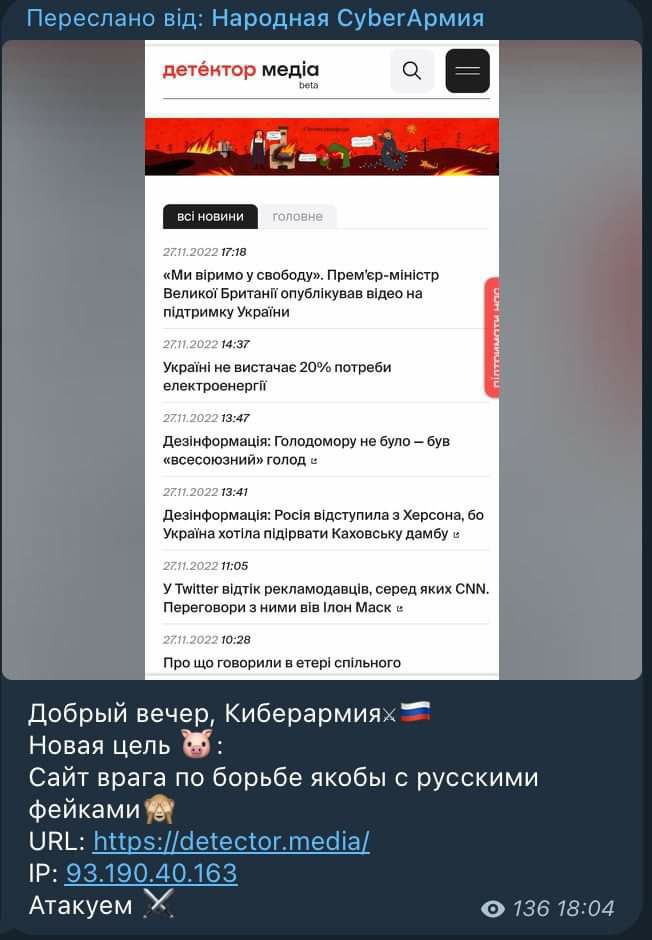 In her comment to IMI, the head of "Detector Media", Natalya Lygachova, reported that on November 27, 2022, after the Russian Cyber ​​Army called for an attack on the detector.media website, the load on the site's server started increasing, which indicated that a DDoS attack may have begun.

"We decided to activate cloudflare (protection against DDoS attacks), which we had installed earlier. The protection turned on and started checking the website's visitors, opening a protective page for each new visitor, detecting the attacking bots. But the load on the server didn't decrease – it kept growing, approaching the critical point for the website's functioning, and the site would not always open in the browser. After talking to tech support for cloudflare and the server hoster, we decided to switch to internal algorithms against DDoS attacks.

"After that, during an activity check, we detected the attacking subnets and blocked them manually. During the next few hours, we recorded new attack attempts from new subnets, which were also blocked," Lygachova said.

According to her, thanks to the measures taken to identify and block the attackers, the load on the server decreased and the website was fully operational within 12 hours.