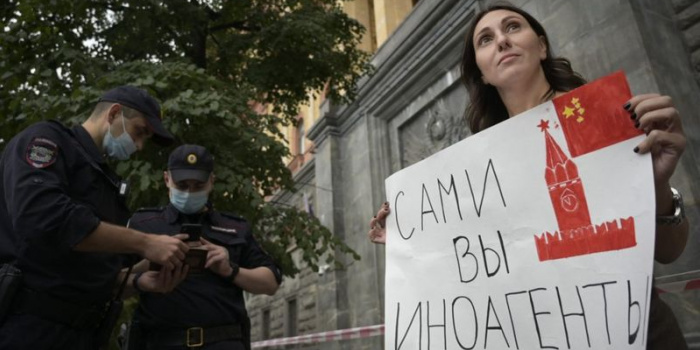 Russia added a dozen new journalists and media organizations to its "foreign agents" list, including RFE/RL reporters and the open-source investigative group Bellingcat, as authorities tightened their grip on independent journalism in the country, as Radio Free Europe/Radio Liberty reported.

The move, on October 8, came hours after the chief editor of Russia's best-known independent newspapers won the Nobel Peace Prize.

The “foreign agent” list now includes dozens of reporters and media organizations, including some of Russia’s best-known journalism groups, as well as many prominent civil society and rights groups.

Being labeled as a “foreign agent” obligates individual journalists and media organizations to register with authorities, and label their content with an intrusive disclaimer, with criminal fines for not doing so.

That has led to several media organizations shutting down as they lose revenues from spooked advertisers.

The designation also restricts other media from citing a “foreign agent” organization without including a disclaimer, something that has caused confusion among some reporters.

The inclusion of Bellingcat, which has published major investigative stories about Russian intelligence’s efforts to poison political opponents, was noteworthy, since the group has no physical or legal presence inside of Russia.

But by including the group on the “foreign agent” list, that potentially means another Russian media organization could now be fined for citing Bellingcat’s reporting.

“Today’s targeting by the Kremlin of five Russian nationals who work for RFE/RL is just the latest attempt to silence independent media in Russia,” the company president, Jamie Fly, said in a statement. “We will continue to fight this absurd use of the 'foreign agent' law to control the information that the Russian people can access and engage with.”

RFE/RL was one of the first media organizations to be targeted under the law, which was originally adopted in 2012 then later expanded to including NGOs and media organizations. That includes RFE/RL’s Russian Service, six other RFE/RL Russian-language news services, and Current Time. Several RFE/RL correspondents have also been added to the list.

While some media organizations have shut down, others have complied with labeling requirements. RFE/RL, however, has not and now faces more than $4 million in fines and criminal liability for some of its top officials.

RFE/RL has filed a lawsuit with the European Court of Human Rights over the law and the fines.

Others added to the list on October 8 included journalists from TV Dohzd and the BBC Russian Service, as well as the publisher of Caucasian Knot, a website focused on the North Caucasus.

On September 1, editors in chief and publishers of more than 20 independent Russian publications demanded in an open letter that the current list of media "foreign agents" be canceled, and amended.

The new designations came hours after the Nobel Committee announced that Dmitry Muratov, the editor in chief of the newspaper Novaya gazeta, was a co-winner of this year’s Nobel Peace Prize, honoring him and Filipino-American journalist Maria Ressa for the commitment to press freedoms.

In the two decades Muratov has led the newspaper, the publication has seen six of its journalists and contributors killed or assassinated.

Most of those killings have never been fully solved.