RSF raised Ukraine by 6 positions in World Press Freedom Index, but they noted some deterioration 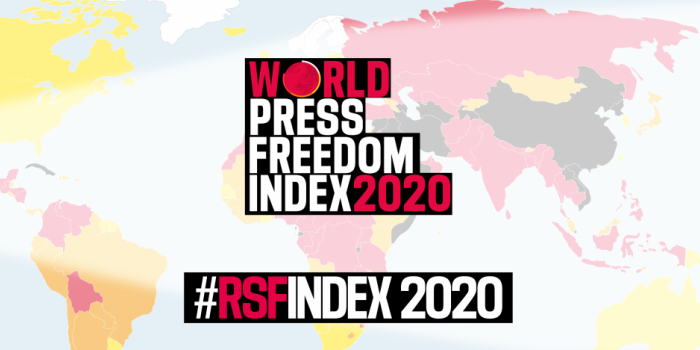 At the same time Ukraine lowered its score by 0.06 points and now its index - 2.52. Thus, upgrading of Ukraine in the ranking was due to the worse performance of other countries.

RSF said that “the new independent public broadcaster’s under-financing has shown. Much more is needed to loosen the oligarchs’ tight grip on the media, encourage editorial independence and combat impunity for crimes of violence against journalists. “Information warfare” with Russia has had negative consequences that include bans on Russian media and social media, the blacklisting of foreign journalists and treason trials.”

The change of government and the hopes raised by Volodymyr Zelensky’s election as president have not as yet reduced the threats and attacks against journalists. The victims include Vadym Komarov, an investigative reporter who was fatally injured when attacked and beaten in May 2019 in the centre of Cherkasy, 180 km southeast of Kiev. Concern continues to focus on access to information, news manipulation, violations of the confidentiality of sources, cyber-attacks, and excesses in the fight against fake news (including a proposed anti-disinformation law that would threaten press freedom). The separatist-controlled east of the country is still a no-go area without critical journalists or foreign observers”.

This 2020 edition of the Index, which evaluates the situation for journalists each year in 180 countries and territories, suggests that the next ten years will be pivotal for press freedom because of converging crises affecting the future of journalism: a geopolitical crisis (due to the aggressiveness of authoritarian regimes); a technological crisis (due to a lack of democratic guarantees); a democratic crisis (due to polarisation and repressive policies); a crisis of trust (due to suspicion and even hatred of the media); and an economic crisis (impoverishing quality journalism).

“We are entering a decisive decade for journalism linked to crises that affect its future,” RSF secretary-general Christophe Deloire said. “The coronavirus pandemic illustrates the negative factors threatening the right to reliable information, and is itself an exacerbating factor. What will freedom of information, pluralism and reliability look like in 2030? The answer to that question is being determined today.”

Based on Reporters sans frontières report