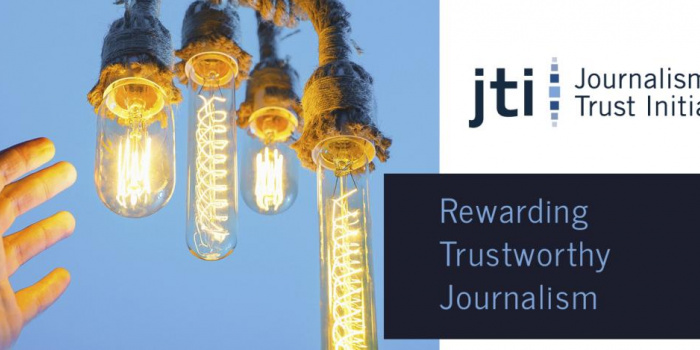 International non-governmental organisation Reporters Without Borders (RSF) announces today the public launch of its Journalism Trust Initiative (JTI), a game-changing transparency tool designed to promote trustworthy journalism. At the core of the JTI is the self-assessment of media outlets to diagnose, optimize and promote the accuracy of their journalism, with the aim of building a healthier news ecosystem, identifying and rewarding reliable reporting and restoring audiences’ confidence in journalism at large.

The JTI is built on a list of criteria that was developed by RSF in collaboration with over 130 organisations and individuals representing the media industry, academia, regulatory and self-regulatory bodies, tech companies and the media development sector. It was originally published by the European Committee for Standardization and is now available as an interactive web application online.

The JTI offer consists of three stages; first the media outlet is invited to complete a self-assessment via the JTI online app, which involves an internal check of conformity with the JTI Standard. Next, the results of this self-assessment may be voluntarily disclosed to the public and published by the media outlet as a Transparency Report. The final stage of the process is an external audit involving an independent evaluation by a licensed Certification Body. The media outlet will be certified and awarded a JTI Mark following the successful completion of all three stages.

“In the current information chaos, falsehoods, propaganda and hate speech have a competitive advantage over journalism”, said Christophe Deloire, Secretary General of Reporters Without Borders. “This has negative consequences for both the public, as it limits its capacity to make fact-based decisions, and for the sustainability of journalism. If we want to get out of this downward spiral, we have to reverse the logic by incentivizing journalism through a trusted third-party mechanism. JTI is a game changing initiative as it turns compliance with professional norms into a tangible asset, and eventually a contribution to the sustainability of journalism.”

The antidote to disinformation

The development of the JTI is a direct response to the viral spread of disinformation in recent years. According to the Edelman Trust Barometer 2020, as many as 74% of internet users say they are concerned about disinformation on social media, while 64% turn to the news media for reliable information. As a result, demonstrating the trustworthiness of their work cannot only remedy users’ concerns, but also drive reach and revenues of news media. The JTI now provides them with a one-of-its-kind online tool to achieve this and, in addition, to get independently audited based on their self-assessment to obtain a ‘JTI Mark’ – the symbol of conformity with the JTI Standard.

“The trust problem facing journalism and media organisations is so big that any initiative that flags proper newsroom processes and helps to put a distance between professional newsrooms and purveyors of junk news is welcomed” adds Vincent Peyrègne, CEO of WAN-IFRA, the World Association of Newspapers and News Publishers. “Whether news organisations elect a light option of self-assessment of editorial processes, using the JTI web app, or opt for full audited certification, the move to explicit standards will help identify newsrooms with trustworthy processes.”

Fighting disinformation and detoxing the information space requires audiences, but also businesses, such as marketers and distributors, to be able to differentiate between high-quality, reputable sources and questionable information. The JTI delivers this distinction in a transparent, normative and machine-readable way, so that users can immediately tell whether an outlet is trustworthy. For media outlets, this represents an opportunity to demonstrate professional leadership and an opportunity to capitalise on it.

Today's launch of the JTI web application was preceded by a pilot phase in which a diverse range of nearly 50 media outlets have participated to thoroughly test the instrument, including CBC/Radio-Canada, France Télévisions, SWI swissinfo.ch (SRG-SSR), the Schibsted Group, Tiempo Argentino, DER SPIEGEL, Colorado Public Radio, Economedia in Bulgaria and The Wire in India.

Noel Curran, Director General, EBU, said “Public trust in news is vital, yet the rise of harmful disinformation means it is in danger of being permanently undermined. The EBU has been a strong supporter of the JTI from the start, with several of our Members involved in the standard-setting process to promote accuracy and signal to audiences those news sources that they can rely on. That these standards are now being made available to media organizations worldwide will create a strong counter-balance in a world overwhelmed with fake news.”

From now on, every Media Outlet can join by visiting the JTI online tool, which is initially available in English, French and Spanish, and create a profile for self-assessment.

Interested professionals in the media industries can learn more about the three-stage process of the JTI by attending a webinar on 7 June 2021. It will offer an introduction to the tool and feature a peer-to-peer panel comprised of representatives from media outlets that were involved in the pilot phase, sharing their first-hand experiences of the initiative.

Co-funded by the European Commission and Craig Newmark Philanthropies, the Journalism Trust Initiative delivers a large-scale, inter-disciplinary move towards improving professionalism and transparency in our common information and communication space.