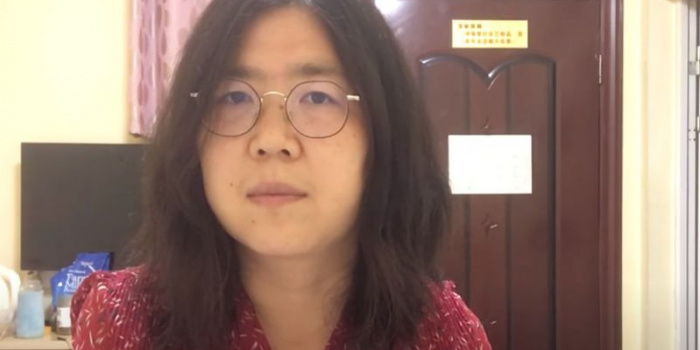 BBC
On September 17th, Reporters Without Borders (RSF) and a coalition of 44 human rights NGOs urged Chinese President Xi Jinping to exonerate and release Covid-19 reporter Zhang Zhan, who has been on hunger strike since May 2020, for which she was forced-fed,  as Reporters sans frontières reported.

In a joint letter published on 17th September 2021, Reporters Without Borders (RSF) and a coalition of 44 human rights NGOs urged Chinese President Xi Jinping to exonerate and release Zhang Zhan, 38, a journalist who covered the early stages of the Covid-19 pandemic in the city of Wuhan (Central China).

On 28th December 2020, after a mere three-hour trial, the Shanghai Pudong New Area Court sentenced her to four years in prison for ‘picking quarrels and provoking trouble’. To demonstrate her innocence, Zhang has been on hunger strike since May 2020, for which she was force-fed through a nasal tube, and is at risk of dying if not immediately released.

“Zhang Zhan did not commit any crime but instead courageously risked her life to inform the public on the health crisis. She should never have been arrested, let alone subjected to a harsh prison sentence”, says the head of RSF East Asia bureau, Cédric Alviani, who urges President Xi Jinping to “ensure that Zhang Zhan is released before it’s too late.”

According to her family, Zhang has lost significant weight and was hospitalised for 11 days in early August but has since been returned to prison despite her deteriorating health. Zhang Zhan was also reportedly the victim of ill treatment and her family has been systematically denied visits.

Kunchok Jinpa, a leading source of information about Tibet for journalists, died in February 2021 as a result of mistreatment in detention. Nobel Peace Prize and RSF Press Freedom Prize laureate Liu Xiaobo and dissident blogger Yang Tongyan both died in 2017 from cancer that was left untreated in detention.

China, ranked 177th out of 180 in the 2021 RSF World Press Freedom Index, is the world's largest captor of journalists with at least 122 detained.

Association of the New School for Democracy

FIDH, within the framework of the Observatory for the Protection of Human Rights Defenders

The Coalition For Women In Journalism (CFWIJ)

World Organisation Against Torture (OMCT), within the framework of the Observatory for the Protection of Human Rights Defenders