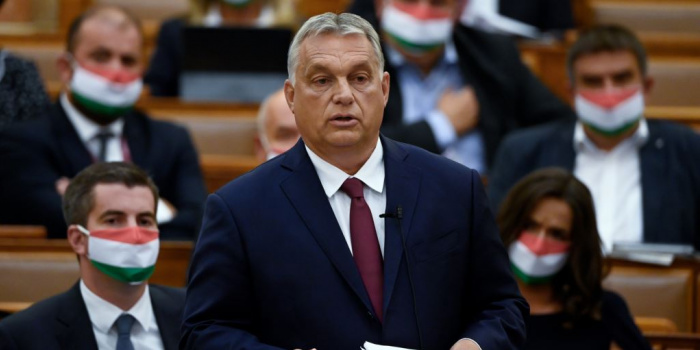 An investigation by RFE/RL has found journalists at Hungary's public broadcaster faced pressure leading up to European Parliament elections in 2019, including orders to push, among other things, an anti-migrant narrative, a key issue of the government of Prime Minister Viktor Orban, as Radio Free Europe/Radio Liberty reported.

RFE/RL obtained leaked audio recordings and other testimony, including internal e-mail, indicating that editors at Hungarian broadcaster MTVA instructed reporters on how to cover certain issues, including opposition parties and candidates.

In one recording, the voice of Balazs Bende, a senior MTVA editor, can be heard telling reporters, "I'm sure no one will be surprised to hear that it is not the opposition's list that enjoys the support of this institution."

"Whoever is in charge must produce content according to the appropriate narrative, method, and direction, mostly about migrants and Brussels," Bende can be heard saying.

"If anyone is not prepared to work under these conditions, he is free to file his resignation immediately," he added.

Internal e-mail and employee testimony obtained by RFE/RL indicate MTVA reporters were also told to take a critical stance not only on migrant, but LGBT issues as well, along with climate change.

Orban, whose stated aim has been to transform Hungary into an "illiberal democracy," has drawn censure abroad with his anti-immigration rhetoric and sweeping reforms that have earned him accusations of authoritarianism from the European Union. He has denied these accusations.

He has nonetheless enjoyed enduring popularity at home, winning three straight terms to become Hungary's longest-serving postcommunist leader, and has repeatedly shown his ability to bring tens of thousands of supporters onto the streets.

Over the past 10 years, the Orban government has taken control of most of the country's press outlets, either directly or indirectly.

Since 2010, Hungary's public television and radio stations and the state news agency have gradually come under much tighter political control than under previous governments.

In 2019, about 500 private media outlets were concentrated into the Central European Press and Media Foundation (KESMA), which has close ties to the Orban government.