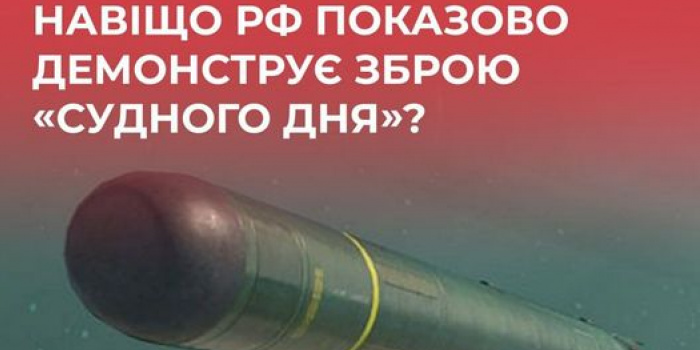 Russia is going to step up nuclear blackmail, therefore there is a high probability of various provocations on its part, stresses the Center for Countering Disinformation at the National Security and Defense Council.

"In recent days, foreign media have been spreading information from secret sources that the Kremlin may want to use nuclear weapons. Even at the beginning of Russia's full-scale invasion of the territory of Ukraine, the Russian Federation put its nuclear forces on special combat alert. A demonstrative show of Russia's readiness to carry out a nuclear attack on the territory of Ukraine at any moment is another stage of information terrorism organized by the Russian Federation in order to coerce Ukraine into negotiating on the Kremlin's terms," the statement reads.

The NSDC recalled that the Italian newspaper La Repubblica initially reported that the Russian "submarine with nuclear warheads has gone on a test run." Then The Times wrote that "Putin orders to send a nuclear military train to Ukraine." In the meantime, various Twitter users are sharing videos of the effect that Russia's targeted use of nuclear weapons along the front line would have.

According to IMI's research, for some Ukrainian media, the nuclear threat has become a TOP topic. Among all the media included in the monitoring, Channel 24, TSN, and UNIAN wrote about the so-called "nuclear question" more often than others. It seems that they decided to “pad” their websites by making more content with comments from people whose names are “in the air.” As a matter of fact, some of the commentators have gained recognition precisely by "touring" as "experts" from topic to topic – even if their expertise in some specific issues, such as the nuclear threat, is questionable.