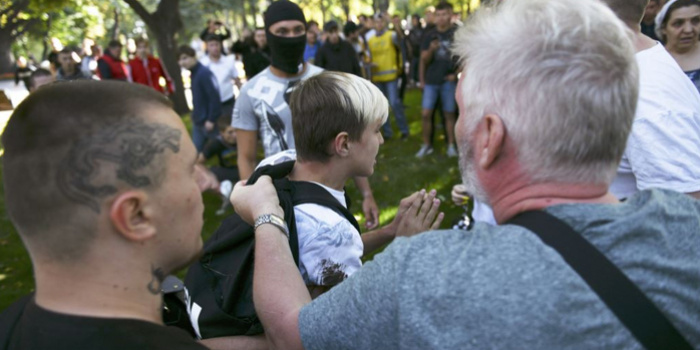 On September 15, around 2,000 lesbian, gay, bisexual, transgender (LGBT) rights activists marched through Kharkiv in the first event of its kind in the eastern Ukrainian city. When the march ended, most of the participants left safely through a nearby subway station, but a crowd of far-right counterdemonstrators had gathered in a neighboring park, apparently on the hunt for LGBT activists attempting to leave on foot, as Radio Free Europe/Radio Liberty reported.

Video from the scene captured one slighty-built teenager with a streak of dyed hair trying to move through the burly opposition group.

Suddenly a tattooed man slaps the teen in the head and a mob chases him -- kicking at his legs and punching him in the head -- as his female friend, wearing a rainbow T-shirt, looks on helplessly.

After the teen is kicked to the ground amid chants and cheers, two masked men try to stomp on and kick him in the head. 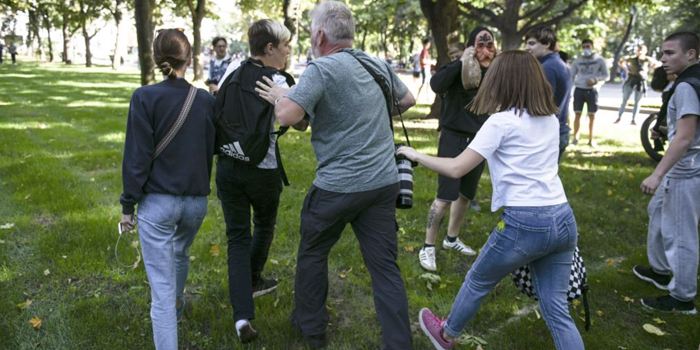 Gleb Garanich, a veteran photographer with Reuters, shot several photographs of the shocking scene that unfolded in front of him.

Garanich has covered conflicts, mostly in the former Soviet Union, since 1991 and understands street violence better than most journalists. In 2013, he was famously photographed soaked with blood after being struck by a riot policeman during Ukraine's 2013-14 Euromaidan protests.

As the beating continued in Kharkiv's Shevchenko Park, a second photographer, Andrew Kravchenko, captured what happened next. After the same tattooed man who had begun the violence grabbed hold of the badly hurt teen, Garanich stepped in to seize the boy from the man's grasp and, without addressing the mob, simply walked the teen out of the situation.

Garanich told RFE/RL by e-mail that he intervened "because there was a serious threat to [the teenager's] life." 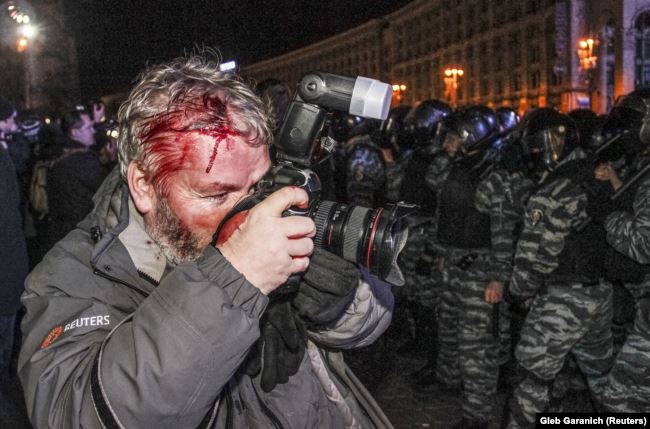 Kravchenko agrees, saying if it were not for Garanich's actions, the boy "could have been killed" by a mob that was hungry for violence and low on targets. "In short," Kravchenko said on Facebook, Garanich is "a real man."

Kharkiv police say they are aware of the attack in Shevchenko Park and "investigative actions are ongoing."