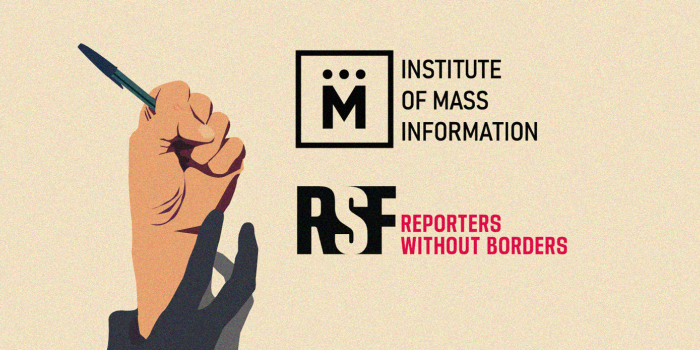 The Centre is located at 39 Pushkinska Street, in the centre of Kyiv. There, journalists will be able to get protective equipment such as bullet-proof vests and helmets, safety training, such as digital safety, and to receive psychological support.

“Opening this new centre will allow RSF to be at front line of protecting Ukrainian and international journalists. A new chapter is opening in our mission to protect and defend press freedom in Ukraine,” said Alexandre Query, the Centre’s coordinator.

As well as 440 bullet-proof vests, RSF has also organised the delivery of 199 helmets, 630 trauma first aid kits and 250 solar external batteries to Ukraine. This protective equipment is mainly distributed to Ukrainian journalists – about 70% of the beneficiaries – by the Centre for Press Freedom as well as by IMI and NUJU. The Press Freedom Centre has lent equipment to more than 180 journalists and other information providers, of whom 40% are Ukrainian, while 210 vests and 125 helmets have been handed over to RSF’s local partners.

IMI executive director Oksana Romaniuk stressed the importance of this partnership with RSF.

“In times when doing journalism in Ukraine became extremely dangerous, due to the large-scale invasion of Russia, the support from Reporters Without Borders has become very important for us. We believe our partnership with RSF will help save the lives of journalists, increase their safety, and defend freedom of expression in Ukraine,” she said.

Any journalist who is accredited with the Ukrainian Armed Forces and who is travelling to a high-risk area can borrow equipment in Kyiv and Lviv.

To do this, they will need to contact [email protected], show their ID and accreditation, and sign a loan affidavit.

We remind that Reporters Without Borders and IMI opened a Press Freedom Centre in Lviv on March 12. The center is located at 20 Ruska Street, on the premises of the Lviv International Media Centre. The Centre is one of the places where journalists can receive protective equipment, and there are also several workstations with internet connection and a shelter in case of a russian attack.