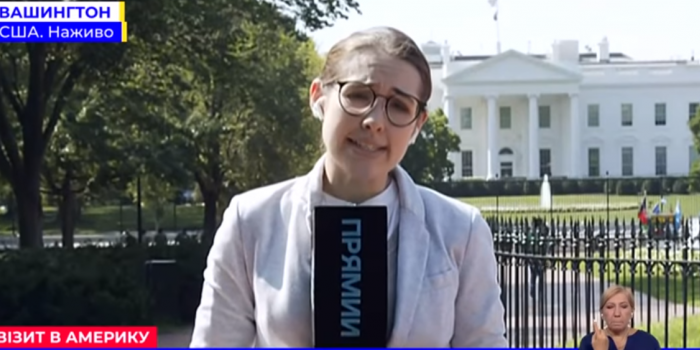 Pryamiy TV channel was denied access to the information about the meeting of the Presidents of Ukraine and the United States Volodymyr Zelensky and Joe Biden in Washington. Kateryna Lisunova, a special correspondent for Pryamy TV reported it from the United States on 30 of August, as to Pryamy website.

Kateryna Lisunova told that the Presidential Office refused to provide the TV channel with full access to the information on the visit of the Ukrainian head of state to the United States.

"As of now, we have not been informed about the schedule, about the events and they have not even been added us to the joint chat of journalists who have news bureaux in the United States that who will cover the visit of the Ukrainian president," Lisunova said.

"When I asked Serhiy Nikiforov, the president's spokesman, what the reason of such a mess was, or maybe was it just a mistake, I was told that it was his personal chat with the persons he was  acquaintanted with and his friends. And as for me, he said, he was not acquainted with, ”the special correspondent said.

At the same time, Lisunova assured that Pryamy would cover the meeting of the presidents, but with the support of the Americans rather than the Ukrainian side.

As Serhiy Nikiforov told Detector Media, Lisunova can turn to the police if she found that there were facts of "obstruction of journalistic activity."

"This is an accusation of a criminal offense. Let her immediately turn to the police, if she has to report of such facts," Nikiforov said.

As IMI reported, on August 30, Hromadske claimed that they had not been accredited for the meeting in Washington of the Presidents of Ukraine and the United States Volodymyr Zelensky and Joe Biden. A spokesman for the President of Ukraine, Serhiy Nikiforov, said that the situation was due to a "small quota" set aside by the White House for the media.