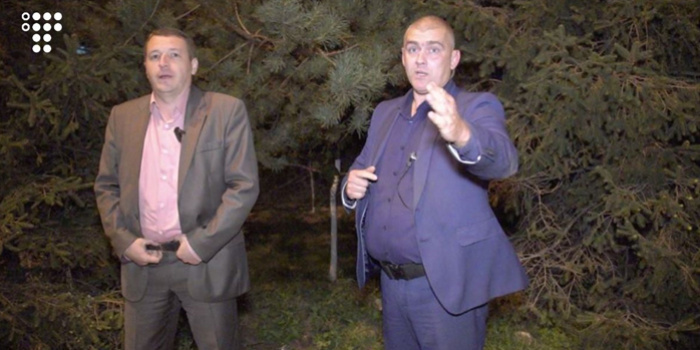 On 7 October, the Prosecutor's Office of the Kyiv region canceled the decision to drop the case over bodily harm to “Schemes” journalists at the wedding of the son of ex-prosecutor Yuriy Lutsenko. This was reported on the website of the Prosecutor General's Office.

“On October 7, 2019, the Prosecutor's Office of Kyiv region cancelled the resolution of the Investigative Prosecutor's Office of the region of 08.05.2019 to abandon the criminal proceedings over injury to journalists in the territory of one of the suburban complexes by the employees of the State Security Service under Part 2 of Art. 345-1 of the Criminal Code of Ukraine,” the report reads.

IMI reported, the Prosecutor's office of Kyiv region has dropped the criminal сase over obstruction of journalistic activity of the “Schemes” program TV crew at the wedding of the son of the former Prosecutor General Yuriy Lutsenko. On October 7, the journalist with “Schemes”  Mykhaylo Tkach told it on his Facebook page .

“It took almost two yars to the subordinates of the prosecutor general Lutsenko to fail to find  corpus delicti. Two years,” he wrote.

As Mykhayklo Tkach told, the lawyer was trying to get to know the name of the investigator for two years. "Our lawyer wrote several requests. She was trying to obtain at least any information on the progress of the case. But radio silence,” Tkach wrote.

According to him, the case was closed yet in May by some Lutsenko's subordinate.

The relevant resolution on the closure was introduced by the investigator in the particularly important cases of the Investigation Department of the Prosecutor's Office of the Kyiv region, Mikhaylo Voznesensky.

“There is no evidence to indicate that the doings of the department DPPOZ of the main directorate of the state security of the of Ukraine contained signs of the crime under Part 2. Article 345-1 of the Criminal Code of Ukraine has not been obtained,” Voznesenksy stated.

The investigator also noted that when considering the materials of the case, he concluded that "the case files of the criminal proceedings did not have any subjective side of the crime, which means direct intent."

The journalists with “Schemes” will appeal the decision to close criminal proceedings.

“We consider the ruling unlawful and such that did not take into account all the collected evidences in the case. We also believe that the investigator's findings do not correspond to the actual circumstances of the case, since they are based only on the testimony of interested persons - the main directorate of the state security officers - and are not based on other case files. We have already lodged a complaint with the Pechersk District Court, in which we ask to cancel the ruling and send a further pre-trial investigation, ”- explained Schema lawyer Vira Krat.

IMI reported, on September 16, the officers of Ukrainian State Security Department attacked the filming crew of “Skhemy” near one of the restaurants in Koncha-Zaspa near Kyiv, Radio Liberty reports. The establishment was at that time visited by the President of Ukraine Petro Poroshenko, Prime Minister Volodymyr Groysman, Vice Speaker of the Parliament Iryna Hershchenko and a numbe rof other politicians. “We were 5 meters from the road, near the forest, when the officers of the Security Department attacked us and brought the operator down to the ground. We pushed through to the road. The cameraman had his arm injured, I do not feel any injuries for now”, the journalist of the project Mykhailo Tkach said. He added that when the journalists tried to call police, the Security Department officers attacked them again. “I stopped calling and started photographing this”, Mykhailo said.   “Sschemes” is the joint project of journalist investigations of Radio Liberty and TV channel “UA:First”.