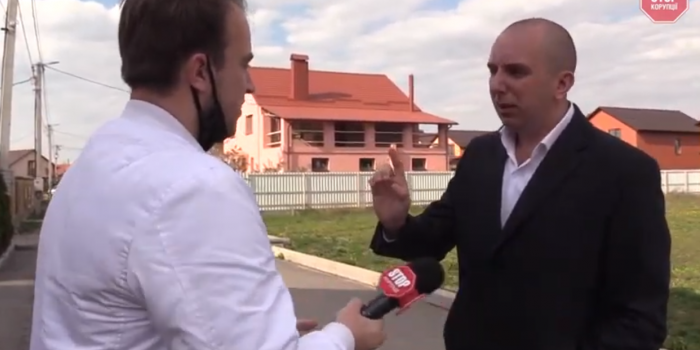 Photo credit: Screenshot from the video of StopCor's video

The prosecutor's office of the region entered the information to the Unified register of pre-trial investigations under the part 1 of the Art. 182 of the Criminal Code of Ukraine ("Violation of privacy").

"Over the night and in the morning of April 28, two men videotaped the house where the head of the State Police in Vinnytsia region lived. In the morning, they blocked the way to the police chief's car,took video of him and his family members, including minors. These actions were documented by the Vinnytsia District Police Department's Investigation Task Force, and the people who took footage called themselves journalists, but they presented no press cards and were invited to the police department to identify and testimony. After that the above-mentioned persons left the premises of police, "- the prosecutor's office reports.

As IMI reported, on April 28, the StopCor news portal reported that in Vinnytsia region, on April 27, police seized video footage of its TV crew near the home of Yuri Pedos, chief of the Vinnytsia Central Police Department. The TV crew came to film the estate that the official failed to declare and to ask him to comment it on.  Yuri Pedos claimed that StopCor's journalists illegally surveilled his family, he found this activity as provocation.