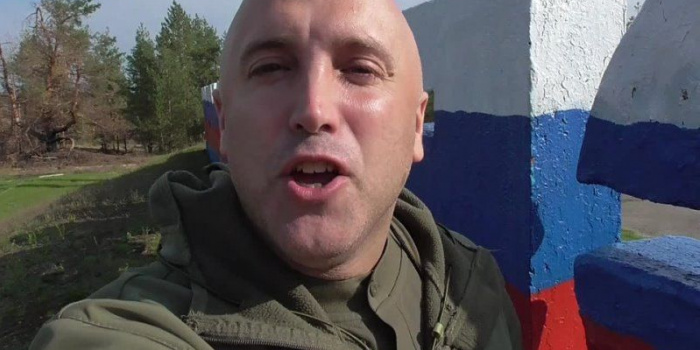 Graham Phillips, a Brit working for Russian propaganda, has once again arrived in Ukraine illegally. This is reported by the LIC website, controlled by the "LPR" militant group.

It says that on October 24, Phillips came to Lysychansk, which was occupied by the Russians. Allegedly, he brought "humanitarian cargo" to local residents and LPR fighters.

It should be noted that all checkpoints on the Ukrainian-Russian border in Luhansk and Donetsk oblasts are closed. They are closed in Crimea as well. You can only enter the occupied territories from the territory controlled by Ukraine, but Phillips has been banned from entering Ukraine since July 2014.

Since the spring of 2014, Graham Phillips has been actively involved in producing Russian propaganda and cooperating with Kremlin TV channels. In July 2014, he was banned from entering Ukraine, but entered the occupied territories illegally.

In November 2018, Phillips tried to provoke Oleksandr Scherba, Ukraine's ambassador to Austria, into a fight near the Ukrainian embassy in Vienna.

In October 2018, he defiled the grave of OUN leader Stepan Bandera at the Waldfriedhof cemetery in Munich.

In 2017, the Chief Military Prosecutor's Office of Ukraine obtained access to all of Phillips' phone conversations between April 1, 2014, and January 1, 2017. According to the Prosecutor's Office, during his stay in the occupied parts of Donetsk and Luhansk oblasts, Phillips actively cooperated with the militant leaders Arseniy Pavlov (Motorola) and Mykhailo Tolstykh (Givi).

In Ukraine, particularly in the ATO area, the propagandist used a mobile phone with MTS and lifecell SIM cards to communicate with the terrorists about covering their activities and receive information for filming his stories where he interrogates Ukrainian PoWs.

According to The Sun, Phillips taunted Ukraine PoWs Aiden Aslin and Shaun Pinner in videos following their capture. Interrogating Aiden, 28, the propagandist accused him of being a mercenary and uploaded the 44-minute video to YouTube. During the iterrogation, Aiden is handcuffed, injured and distressed. The video was filmed in a jail in occupied Donetsk, where he had been thrown, facing death penalty.

Aiden Aslin has returned home to Newark, Nottingham, after a prisoner swap. He confirmed cops had quizzed him about the role of Phillips, who moved to Ukraine to live.