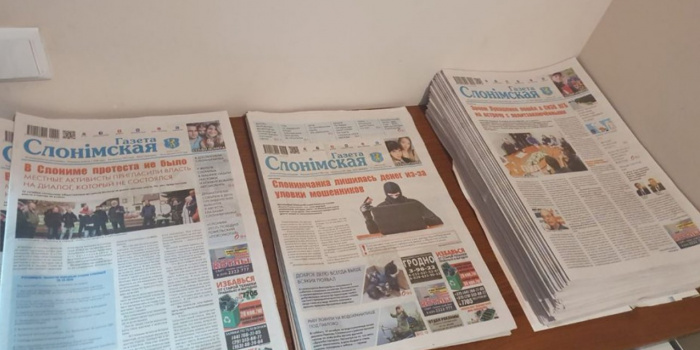 In Belarus, printing houses refused to print the independent “Gazeta Slonimskaya” weekly. This was reported by " Media Detector " with reference to the publication's website.

For the first time, the printing houses began to refuse to print it in November 2020, after searches of law enforcement officers in the editorial office. The issuing of the weekly was suspended for six months, since the fall of 2020.

In early May, the editorial office informed the Belarusian Ministry of Information about the resumption of publication, and the newspaper was included to the register of printed editions.

But, in June the Grodno printing house, where the newspaper had previously been published, sent a letter of refusal. Pinsk and Brest also refused to publish. The editors said that for now the weekly would be available only online.

On August 9, 2020, the presidential election took place in Belarus. The CEC declared Oleksander Lukashenko the winner, while, according to opposition exit polls, candidate Svitlana Tykhanovska won. Western countries have refused to recognize Lukashenko as the winner of the election. Tikhanovskaya went in exile. Authorities brutally suppressed peaceful protests and launched a campaign to intimidate the opposition and the independent press.