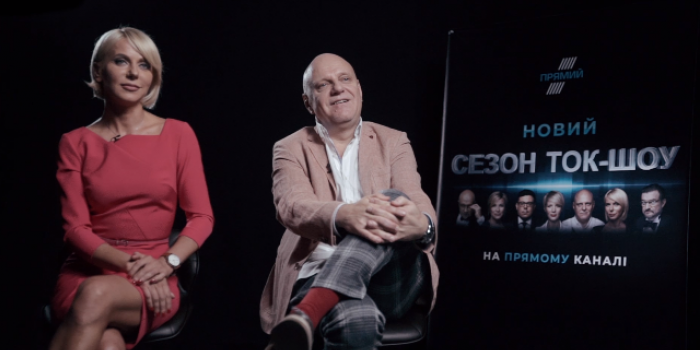 Journalist and TV presenter Mykola Veresen said that he had been fired from the Pryamyy Channel "with no reason given". Mykola Veresen is going to seize the court, as he told it interviewed by “Detektor Media”.

According to Veresen, on May 20, he learned about the final decision to fire him, no final settlement of accounts.

"On 2nd of March, I was asked by Svitlana Orlovska (producer general of Pryamyy - Ed. ) to come to her office and I was said that I was fired. And I was awfully surprised, because there were no remarks, no reprimands "with the entry in a Komsomol member card." I am a collector, I collect resignations. This has never happened before like that, and I have never heard of it like this, today for today: "You quit, that’s all". No one else explained the reasons for my dismissal to me either, ” as Veresen said.

According to Veresen, shortly afterwards, some of his friends, who are related to the channel's political leadership, told the journalist that the owner of Pryamy Petro Poroshenko was trying to change the situation with his dismissal.

"Poroshenko ordered to leave everything as it is: not to touch me, and he charged Svyatoslav Tseholko to settle it. We met. Tseholko said that I am a "valuable asset ", I am the right man and there is no questions to me. Like, let's wait until the end of the month, "said Veresen.

But the issue was postponed to mid-April, then to early May and beyond.

"I waited two and a half months. And last Friday (14 May. - Ed. ) I called again Svyatoslav and demanded explanations in more tough tone. Tseholko promised that Svitlana [Orlovska] would call me tomorrow. However, there were no calls or promised meetings,” Mykola Veresen assured.

The TV presenter added that the general director of the Pryamyy Channel Volodymyr Stashevsky said that a salary for three months would be paid him out. Instead, according to Veresen, he was paid a salary for only two months.

"I realized that they double-crossed me with it as well. The whole construction with dismissal is based on a lie ... I have a reoutation, thank God, but how many people in journalism are just fired just because someone didn't like something? That's why I call on everyone: sign the right contracts, fight for yourself, win, ”the journalist said.

Veresen added that he would seize the court, but he did not yet know, against "Pryamyy channel or on someone in particular."

“I had time to think, tomorrow I will start consulting with my lawyers. I want to get back on the TV channel and, of course, get my salary, ” Veresen said.

For her part, Svitlana Orlovska , the general producer of the Pryamy Channel, told the edition that the presenter Mykola Veresnya had been fired from the TV channel due to the poor ratings of his programs that were broadcast in prime time.

She explained that for Pryamy, as a commercial structure, the key performance indicator is ratings.

“Analyzing over the past six months, the TV channel's management has noticed a sad trend that the ratings of programs hosted by Mykola Veresen are obviously lower than it was before or with other presenters, especially considering that these are the most important prime hours. That is why the management of the "Pryamyy" TV channel decided to change the format of the slot, which was hosted by Mykola Veresen since the new season has started on, on March 9, "said Svitlana Orlovska and thanked Veresen for his job on behalf of the TV channel staff.

According to her, the owner of Pryamyy, Petro Poroshenko, did not make a decision to dismiss the host.