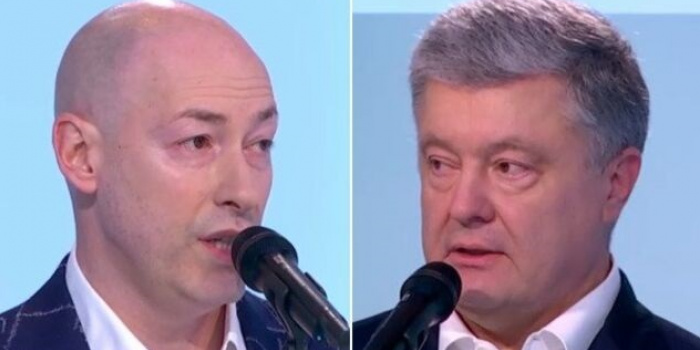 Former president Petro Poroshenko will sue the founder of “Gordon” online edition Dmytro Gordon for slander. Dmytro Gordon claimed to be ready to be at law.

Poroshenko's intentions to seize the court were announced at a briefing on May 12 by his lawyer Ilya Novikov, as Hromadske reported.

According to Ilya Novikov, the lawsuit was due to Gordon's words on the talk show "Freedom of Speech by Savik Shuster" aired on May 7, where he spoke about the events of 2014, including the battle for Mariupol.

On the talk show, Dmytro Gordon said that the city was saved thanks to the efforts of the “Azov” Volunteer Regiment, and "the leadership of Ukraine entered into a criminal collusion with the leadership of Russia."

"Poroshenko and Putin got arranged, I guess, that Mariupol should be given up. The army got an order to leave Mariupol, ” as Dmytro Gordon said at the talk show.

According to Illya Novikov, Gordon's words, despite he added "I guess", could be regarded as a slander.

"Dmytro Gordon has long antecedents of comments he had made on the policy of the fifth president. No one is challenging his right not to love Poroshenko and talk about it. However, this is an abuse of "freedom of speech," as Poroshenko's lawyer said.

In a video blog-reply, Dmytro Gordon said that, in his mind, it was not about Mariupol, but the envy of the fifth president, because he had recently released his own candies. Dmytro Gordon also recalled the alleged ties between Petro Poroshenko and Viktor Medvedchuk.

"In any case, the trial with Petro Poroshenko will be a fascinating performance that will be watched online by millions of people around the world," as Dmytro Gordon said.

The “Gordon” edition reminded that in February, Petro Poroshenko commissioned his lawyers to consider an option of a lawsuit against those who, according to him, spread false information about his attitude to the party "Opposition Platform - For Life" and the chairman of its political council Viktor Medvedchuk.