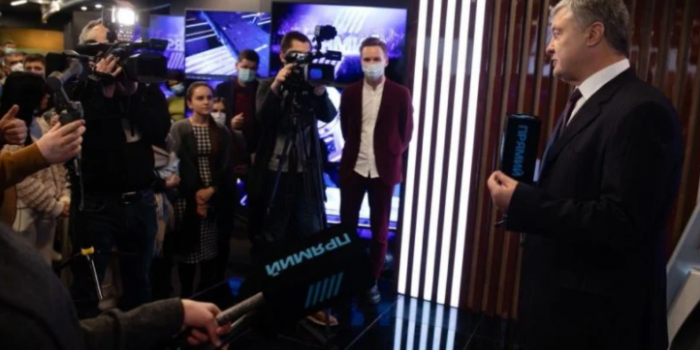 The leader of the “European Solidarity” party Petro Poroshenko met with journalists of the Pryamiy TV channel and proposed them to develop an agreement on the principles of editorial policy, as Pryamyy TV reported.

He proposed to take as model this one signed 18 years ago with 5 Kanal journalists.

"I ask the labor association, the journalistic staff to prepare a document "Editorial Policy Framework" in order we legitimize our relations from the perspective of protection of journalists' rights, protection of freedom of speech. We have to showcase the difference from the way the other broadcasters areused to do it,” Poroshenko said.

He also thanked journalists and called for continuing to pursue a pro-Ukrainian course.

"You are pro-Ukrainian journalists, and you are pursuing a pro-Ukrainian policy. You have been pursuing - and I thank you very much for this - for many years a policy of counteracting Russian informational influence in the media landscape of Ukraine,” Petro Poroshenko said.

He mentioned also that since two years the channel the staff of "Pryamyy" has been working “under an intense pressure from the authorities."

As IMI reported, on February 18, the co-chairman of the European Solidarity faction, former President of Ukraine Petro Poroshenko, announced that he had become the owner of “Pryamyy” TV channel.

From now on, the ultimate beneficiary of the TV channel is the Prime Asset Capital Foundation, a structure that is 100% owned by Petro Poroshenko.

We will remind, the Law of Ukraine "About television and radio broadcasting" provides:

“Article 57. Editorial charter of a television and radio organization

1.The editorial charter of a television and radio organization shall contain requirements for the creation and dissemination of information.

2.The editorial charter is to be approved by the owner of the television and radio organization or the body authorized by him.