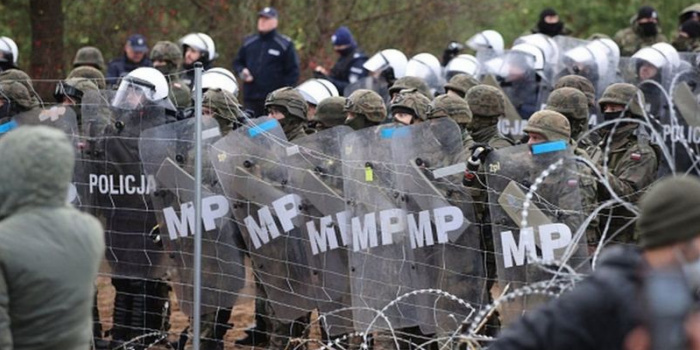 Polish government must lift all restrictions and allow the reporters to cover the migrant crisis on the border with Belarus. Such is the message the Reporters Without Borders (RSF) made in an open letter addressed to Polish parliament, as to RSF website.

The statement followed the arrests by the Polish military of a Czech photographer, two of his Polish colleagues on November 16, and many other incidents of obstruction of reporters near Poland's border with Belarus.

The report said that on November 16, handcuffed photographers were grossly insulted, their cameras, mobile phones and car were searched by Polish soldiers, after they tried to take photographs of a military base temporarily located near the border.

The soldiers treated them like criminals, violated their right to privacy of sources, and held them for an hour and a half until the Polish police arrived, human rights activists said.

“For the first time in my adult life I had such a strong feeling that someone had violated my rights,” one of the three journalists, Maciek Nabrdalik who works with New York Times, told RSF.

Nabrdalik and the other two photo-journalists – Maciej Moskwa of the Testigo production agency and Martin Divisek, a Czech photographer with the European Pressphoto Agency – had identified themselves as journalists to the guards at the military base prior to their arrest. They had not entered the border area, to which journalists are denied access under the state of emergency imposed in response to the Belarusian government’s manipulation of foreign migrants. Also they had made sure this base was not on the list of places that are “prohibited” for journalists, as RSF reported.

The defence ministry’s initial statement, denying the journalists’ account and accusing them of failing to identify themselves, did not hold up for long. When the three journalists sent an audio recording of their arrest to the media and to RSF, the military police announced an investigation into the soldiers’ conduct and, RSF has learned, invited at least one of the three journalists to give a statement.

Arrests of journalists had been multiplied since recent weeks, and RSF has condemned restrictions of press freedom in Poland as arbitrary and disproportionate. But the Sejm (the lower house) has passed amendments to the border law that do not safeguard the ability of journalists to work freely in the border area.

The upshot is that, although the amendments officially lift the overall ban on visiting the border area covered by the state of emergency in effect since 3 September, the border police can still prevent journalists from working in the area.

“We call on the Senate to reject the proposed border law and we call for the media to recover all the rights they enjoyed before the state of emergency,” said Pavol Szalai, the head of RSF’s European Union and Balkans desk.

“Although it is legitimate for the Polish state to address security risks in the border area, the media must be able to cover police and military operations and migration, which is a public interest issue. The authorities must also punish those responsible for the violent arrests of Maciek Nabrdalik, Maciej Moskwa and Martin Divisek, and for the violation of the confidentiality of their sources. Polish soldiers cannot treat journalists as if it were a military dictatorship.”

The initial grounds given by the Polish authorities for declaring a state of emergency in the border area were the military exercises held by Russia and Belarus and the migrant crisis. The restrictions imposed on press freedom – regarded as arbitrary and disproportionate by the media and RSF – ban journalists from working in a three-kilometre strip along the Belarusian border. Violations are punishable by up to 30 days in prison or a fine of 5,000 zlotys (1,062 euros).

President Alexander Lukashenko invited foreign journalists to come to the Belarusian side of the border to cover the crisis – a crisis that he provoked, according to European governments. Poland’s mainstream media have refused to go for fear of being used for propaganda purposes, but journalists are meanwhile still being subjected to many obstacles on the Polish side.

Aside from the photo-journalists arrested on 16 November, two journalists on assignment for the Balkan Investigative Reporting Network, Claudia Ciobanu and Jaap Arriens, were harassed on 14 November by a unit consisting of border police and soldiers. Although outside the area covered by the state of emergency, they were required, under threat of arrest, to provide the IMEI numbers of all their mobile devices, allowing the authorities to monitor their activities.

At least three other teams of journalists have recently been subjected to judicial harassment for violating restrictions on press freedom in the border area. Bartłomiej Bublewicz, a reporter with the Polish website Onet.pl, and his cameraman were summoned and charged in early September. A crew with the Franco-German TV channel Arte spent a night in a cell in late  September. And in early November, RT France reporters David Khalifa and Jordi Demory were detained for nine hours, according to their media.

Based on RSF's report