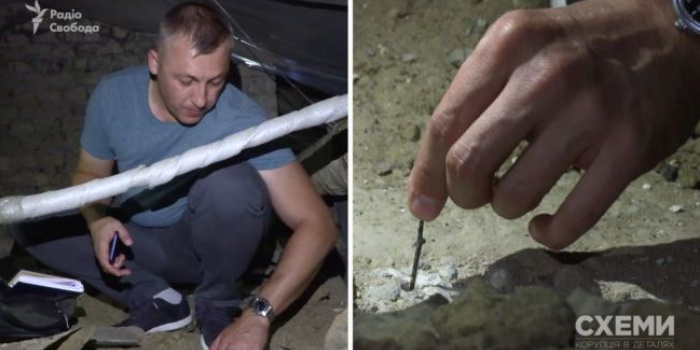 On August 17, police undertook an investigative experiment into a case of alleged wiretapping of journalist for “Skhemy” Mykhailo Tkach, but no special equipment was employed, as the journalist's lawyer Anatoliy Popov told to Radio Liberty.

As Popov said, an investigative task force of the National Police and an expert from the forensic research center of the Ministry of Internal Affairs came to inspect the scene.

According to the journalist's lawyers, such an investigative action will not make good sense for progress of the case, and the inspection with use of special equipment, which the National Police promised to conduct starting on August 8, has not yet taken place.

"From August the 8th, we ask investigators to conduct an investigation of the attic and the apartment of Mykhailo Tkach using special tools that can detect bugs, however, this doesn’t happen. An expert came today, but he just looked at the holes. His task was to find out which side they drilled from, from above or from below. He found out it for himself - he said that, indeed, they had drilled from the attic, ” Popov said.

The investigative team that arrived at the scene told the lawyer that the group's task was "to establish which side the drilling took place from" - from the attic or the apartment. Investigators also said that before that they were in an apartment nearby and listened whether it culd be heard , if they drilled in the attic. Investigators withheld any further comments.

An investigative experiment was conducted during the inspection.

“With its help, they tried to determine if the perforator had been used, whether the corresponding noises would be heard in the next apartment. The investigation has not established how this hole was drilled, so it seems inappropriate to use any tool they think was similar. This investigative experiment has no point. This is a waste of time and an ineffective criminal investigation, ” as the lawyer Anatoliy Popov said.

As IMI reported, on August 8, Mykhailo Tkach, a journalist with the Skhemy (“Schemes: Corruption in Details”) program, said he noticed some signs there was a bug inside his home.

The police opened a criminal case over violation of privacy of the journalist of the program "Schemes: corruption in detail" Mykhailo Tkach under Part 1 of Art. 182 (“Violation of privacy”) of the Criminal Code of Ukraine and under Part 1 of Art. 359 ("Illegal acquisition or sale of special technical means of covert receipt of information, as well as their illegal use").