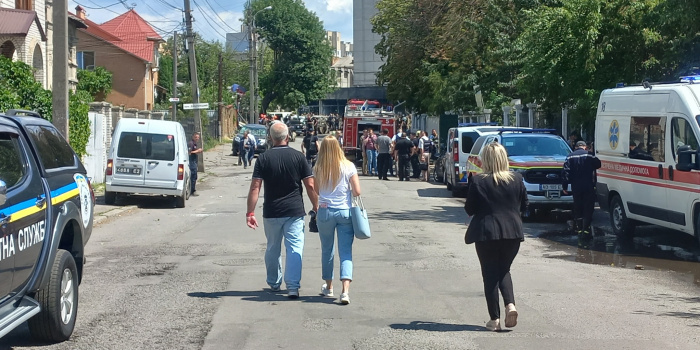 Vadym Pavlov, editor of the Vinnytsia newspaper RIA and the "20 Khvylyn" website, reported that the police prevented him from accessing the site of the tragedy in Vinnytsia after the russian shelling on July 14. He was also not allowed to attend the Minister of Internal Affairs Denys Monastyrsky's briefing.

Vadym Pavlov wrote about this on his Facebook page and reported to an IMI representative.

"I arrived at the shelling site after 20 minutes. We put on vests with PRESS stickers, because we understood that there could be more shelling. The policemen who stretched the tape around the place did not allow me to pass behind it. Ok. I explain to them. What the Ministry of Culture and Information Policy of Ukraine and The Ministry of Defense allows journalists to collect (!) information immediately after the shelling. Posting it is allowed after three hours (for civilian objects) or 12 hours for military ones. The answer I get is 'no,'" he wrote.

At the same time, the journalist drew attention to the selectivity in allowing the media to the site.

"Deputy mayor Halyna Yakubovych is passing by here, and what is she doing? That's right. She's leading the "Vita" channel filming crew with her. That is, one is allowed. The other is not. I call the head of the regional police, Ivan Ishchenko. I ask for permission to enter. Then I hand the phone over to the policeman. I explain that everyone has already been let in here. They let us in. We take some pictures. Bodies are being carried past us. We are doing our job. And looking for the body of our friend... 10 minutes later, the policemen run up, shout and demand that we 'get out.' I say that we have permission from the police chief. One of them replies that he doesn't give a sh*t about the chief. Only the mayor's permission. In his presence, I call Serhiy Borzov, head of the Vinnytsia Regional State Administration. He gives permission. The policemen hear it. I hang up. They tell me: he did not give permission," Pavlov said.

According to him, he started explaining the rights of journalists to them, but "they started pushing him in the back."

"I ask them to stop doing this. He pushes me in the back again and again and shouts, 'Get out.' The asshole who did this is Andrii Martynyuk, the commander of the rapid response company. After that I left the site of the tragedy. And then came back a few hours later together with Vinnytsia and international journalists," wrote Vadym Pavlov.

The journalist also said that he was not allowed to attend the briefing of the Minister of Internal Affairs Denys Monastyrsky. "I'm going to a meeting with Monastyrsky. It was agreed with the SBU. I approach, say that I'm going to a meeting with the minister. The military around the perimeter say that I can't go in. Who said so? The boss. What boss? A boss. End of conversation. And they did not let me in," said Vadym Pavlov.

The journalist said that he plans to write a statement to the authorities about obstructing his professional activities.

It will be recalled that on July 14, russian troops fired at Vinnytsia with 3M-14E Kalibr missiles. 24 people were killed, including three children.

As IMI reported, representatives of the authorities and the "Media Movement" journalistic community reached an agreement that journalists can collect information on the ground immediately after the shelling. At the same time, photos and videos of events at the site of hostilities taken by media representatives and journalists can be published after 12 hours for military facilities, and after three hours for civilian facilities.