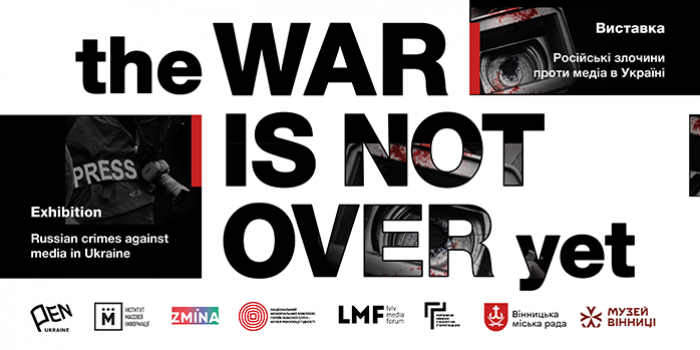 On August 19, photo exhibition The War Is Not Over Yet will open on the European Square in Vinnytsia. The project is designed to tell the stories of those who are making the world aware of the war that russia is waging against Ukraine: the journalists who died, were wounded, have come under fire, were captured or persecuted since the start of the full-scale invasion.

According to the Institute of Mass Information, 37 Ukrainian and foreign journalists were killed at the hands of the russians. Including:

The 34th media worker to die after the beginning of russia's full-scale invasion of Ukraine was Volodymyr Datsenko, a journalist of the "Road Control Vinnytsia" NGO, volunteer, and defender of Ukraine. He was killed by a missile strike on Vinnytsia on July 14. Since the start of the full-scale russian invasion, Datsenko has been helping patrol the city and volunteering. He also volunteered to defend Ukraine as a soldier. On the day of the russian shelling attack on Vinnytsia, he had brought his friend, an Aidar fighter, to a private clinic. The building of the medical center burned to the ground. Datsenko was listed as missing for two days. His death was confirmed on July 15. His burnt journalist ID was found on the site.

The exhibition The War Is Not Over Yet is a show of solidarity with Ukrainian media workers – the men and women who fight for the truth, risking their own lives. Some drop their professional activities and join the Armed Forces of Ukraine. Some are actively fighting on the information front, recording the course of the war and telling the truth about it to the world. Thanks to Ukrainian journalists, photographers, camerapeople and fixers, the international community learns the news from the frontline and sees evidence of russian war crimes.