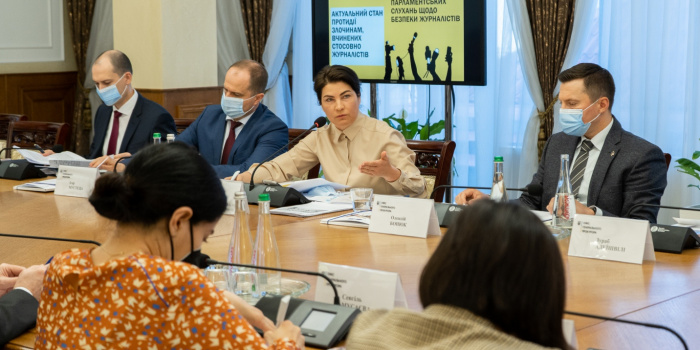 “... Journalists are on guard for freedom of speech, often even risking their lives. Impunity for crimes against journalists is unacceptable, and we seek to change that, so we start this direct cooperation to unite our efforts to fight this phenomenon and make the whole system work more efficiently, ” as Iryna Venediktova said.

According to the recommendations of the parliamentary hearings on the safety of journalists in Ukraine, working and interdepartmental working groups have been set up in the Prosecutor Genera’s Office, and the reports on the progress of pre-trial investigations in this category is regularly heard.

In addition, the attendees spoke of progress into criminal proceedings for crimes committed against journalists. In particular, in 2020, prosecutors have referred charging documents for crimes in this category to court six times more than in 2019. At the same time, in 14 cases of crimes against journalists, the prosecutors achieved judgments of conviction, while in 2019, this was not even mentioned. And for the first quarter of 2021, six charging documents were sent to court and four convictions have already been passed.

The experts also stressed how much was important to relaunch investigation of the most high-profile cases: the murders of journalists Georgy Gongadze, Pavel Sheremet, Vadym Komarov and others.

Special attention was paid to crimes committed against journalists in the temporarily occupied territories of the Autonomous Republic of Crimea, Donetsk and Luhansk regions. These are large-scale and systematic illegal actions against Ukrainian and foreign journalists and media professionals, who objectively covered the process of occupation of the Crimean peninsula and openly opposed the armed aggression of the Russian Federation.

"We realise that the law enforcement system needs to work better. However, I am convinced that there are solutions and we need to look for them. That is why I am initiating the creation of a separate platform: a sectoral working group involving relevant NGOs, mass media editions and journalists who are aggrieved persons, to be able to analyze in detail all the issues, share information and move forward to attain the results. Regional prosecutor's offices should also be involved in the establishing of such sectoral groups, ” Iryna Venediktova said.

As a result of the discussion, further steps have been identified to develop a roadmap for the development of sustainable cooperation to protect journalists' rights.

As IMI reported, on May 25, The Institute of Mass Information provided the Office of the Prosecutor General with a list of violations of journalists' rights for investigation and proposed to form a working group to achieve more progress of such investigations. The PGO has expressed its willingness to contribute to the investigations of the crimes against journalists.