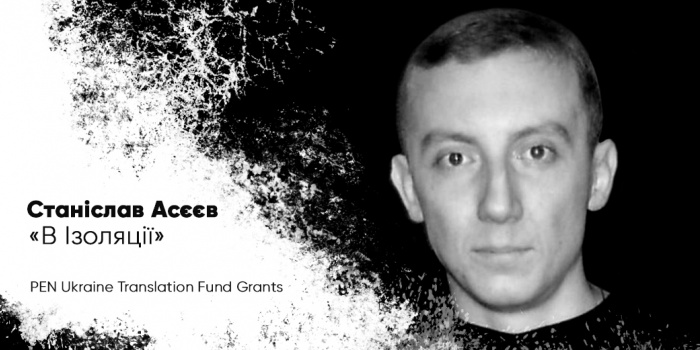 PEN Ukraine in cooperation with the International Renaissance Foundation announces a contest for translation of a book ‘In Isolation’ by Stanislav Aseyev into English and German, as PEN Ukriane reported.

The project will be implemented within the mini-grants program PEN Ukraine Translation Fund Grants, which aims to support the translation of works by Ukrainian authors into foreign languages. Previously, within the frameworks of the program, translations of Oleg Sentsov’s book of stories were published in English, German and Polish had been released.

Stanislav Aseyev (Vasin) is a Ukrainian writer and journalist. In May 2017, he was unlawfully imprisoned in Donetsk by pro-Russian separatists of the DPR. In October 2019, it was revealed that the so-called prosecutor of the DPR sentenced Stanislav Aseyev to 15 years of imprisonment accusing him of ‘extremism’, ‘espionage’ and ‘calls to acts aimed at violation of territorial integrity’.

In 2018, Radio Liberty published in Luta Sprava Publishing a collection of Stanislav Aseyev’s essays In Isolation recounting life on the occupied territory of Donbas written in the period from January 2015 to May 2017 for Radio Liberty, Ukrainian Week, Ukrainska Pravda and Mirror of the Week. The book contains texts in Ukrainian and Russian languages.

In order to draw the attention of the international community to the case of Stanislav Aseyev, PEN Ukraine provides two grants for translation of the book In Isolation into foreign languages with a mandatory guarantee of publication of the book by reputable publishers abroad.

Within the PEN Ukraine Translation Fund Grants Program, PEN Ukraine will provide two grants for translation of Stanislav Aseyev’s book In Isolation into English and German.

The grant support includes a reward of € 3,000 and refund of the copyright fee, but does not cover the costs related with editorial and printing process.

To participate in the program, the translator should apply until 10 February 2020 by sending a letter to [email protected] with the subject field as ‘PEN Translation Fund Grants’ attaching the following documents:

1. Letter of motivation (up to 4,000 characters);
2. Biography and bibliography of the translator;
3. Fragment of the translation of Stanislav Aseyev’s In Isolation (up to 10,000 characters); the book can be downloaded on the website of Radio Liberty;
4. Copy of the contract with the publisher for publication of the book;
5. Letter of intention from the publisher attesting the willingness to cooperate with PEN Ukraine;
6. Schedule of the translation and publishing of the book.

Selection of applicants for the grant program will be handled by the Executive Board of PEN Ukraine.

Names of two translators will be announced no later than on 17 February 2020.