OSCE representative about Ukrainian journalists: I pay tribute to the brave 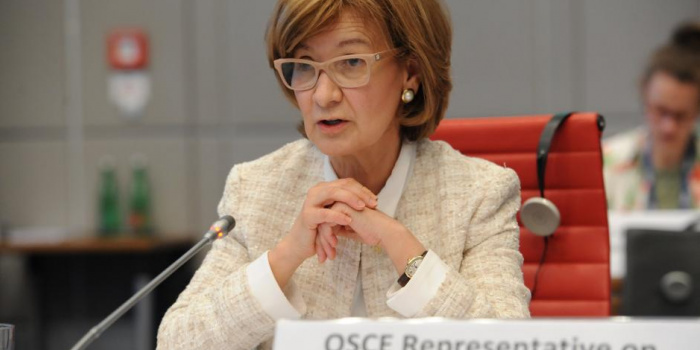 Ukrainian media workers are doing their job bravely despite being wounded, abducted, attacked and killed.

This was stated in OSCE Representative on Freedom of the Media Teresa Ribeiro's annual report on the situation in the media for the OSCE Permanent Council members, according to Detector Media.

She noted that due to the threat to security and freedom of the media in Ukraine, the slogan "There is no security without media freedom" could never ring truer than today.

"I pay tribute to all those brave journalists who keep us informed about developments on the ground, including serious violations of international humanitarian and human rights law. Let me underline the duty to protect media workers and express my gratitude to all those local and international actors who are doing their best to secure journalists’ safety. Such aid needs to be long-term and suited to the situation on the ground," said Teresa Ribeiro.

In her report, she also commented on the situation in the russian federation, where "the most severe crackdown on free speech and media freedom of the last 25 years has been witnessed."

"The russian authorities have systematically violated OSCE principles and commitments regarding media freedom. This has resulted in a situation of censorship and the almost complete isolation of russian citizens from any form of independent information. They are deprived of some of their most fundamental rights: their freedom to seek and receive information of all kinds, and their freedom to share their opinions and to express themselves," said Ribeiro.

The current situation, she stressed, poses a threat not only to the 144 million people living in russia, but also to the common information space and security in the OSCE region.

"Taken together, these limitations form a systemic approach that silences critical voices and dismantles media pluralism. This includes restrictions on media workers’ ability to perform their journalistic duties, the public’s right to access independent sources of information and the rise of media capture, when many media outlets in one country come under control of a few companies or persons, sometimes with close connections to the ones in power," Ribeiro is convinced.

She also touched the subject of the disturbing practice of hacking news websites, using software to monitor journalists and of the impact of artificial intelligence (AI) on freedom of speech and freedom of the media. She also drew attention to the spread of violence and legal harassment of journalists, especially women.

Teresa Ribeiro also recalled the "dreadful" situation in Belarus, where many journalists had been convicted, arrested or detained for their work.