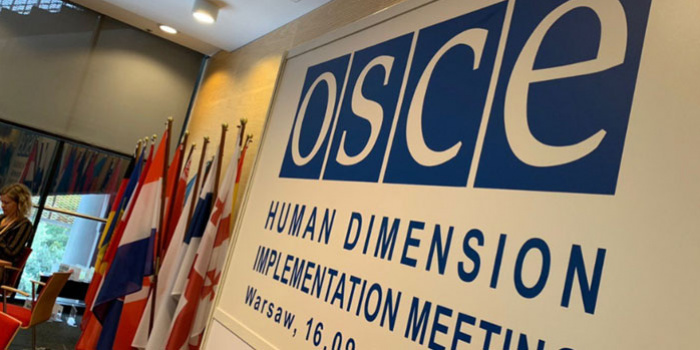 At the OSCE meeting in Warsaw dealing with implementation of human rights commitments by the participating countries, the chairman of the Ukraine National Union of Journalists, Serhiy Tomilenko, expressed solidarity with the Ukrainian and Crimean Tatar journalists persecuted by Russia and called to stop persecution as Radio Liberty reported.

Tomilenko mentioned separately Radio Liberty correspondent Stanislav Aseyev, who has been captured and made prisoner in the DPR since two years.

“We express our solidarity with Stanislav Aseyev, who has been held captive for two years. On September 30, he will be 30 years old. And we call on to join our efforts to release our colleague, ” as Tomilenko said.

The representative of the Crimean human rights group Iryna Sedova, for her part, spoke about blocking of independent Ukrainian media in the annexed by Russia Crimea.

The annual meeting in Warsaw started on September 16 and will last until September 27.

According to the chairman of the Majlis of the Crimean Tatar people, Refat Chubarov, the OSCE meeting registered participants from the annexed Crimea, as representatives from Russia and organizations of the peninsula.

IMI reported, Stanislav Aseyev (Stanislav Vasin), journalist and correspondent for the Radio Free Europe/ Radio Liberty, is held in captivity by Russian hybrid forces in the occupied part of the Donbas from May or June 2017, on charges of "espionage in favor of Ukraine."

On August 20, the European Federation of Journalists (EFJ) reacted to the plot of Russia 24 on the "confession" of the "espionage" of Ukrainian journalist Stanislav Aseyev (Vasina) and urgedhim to be released immediately.

On August 20, 2018, journalists, Ukrainian media and human rights organizations expressed profound indignation at “confession” of Stas Aseyev and supposed that the journalist could have been under physical or psychological pressure.