On the eve of the local elections, the main categories of covert political PR in the national online media were stories lauding the “Opposition Platform - For Life” party and black PR / counter-propaganda targeting several parties, candidates and the government. These are the results of a study of political jeansa conducted by the NGO "Institute of Mass Information" in 19 popular online media. *

The OPFL party and related to it experts and speakers accounted for 37% of all identified materials with signs of an order. The lion's share of these materials was posted on the "party" sites 112.ua and Newsone.

At the second place, in terms of the number of disguised propaganda, we identified stories with elements of smear campagn or counter-propaganda (19% of all materials with signs of order). Moreover, almost half of the counter-propaganda (48.5% of the materials recorded by IMI experts) targetted the incumbent president Zelensky, the government in general, and the pro-government “Servant of the People” party.

In third place in the number of news items with signs of covert political propaganda was the mayor of the capital Vitaliy Klitschko (8%). 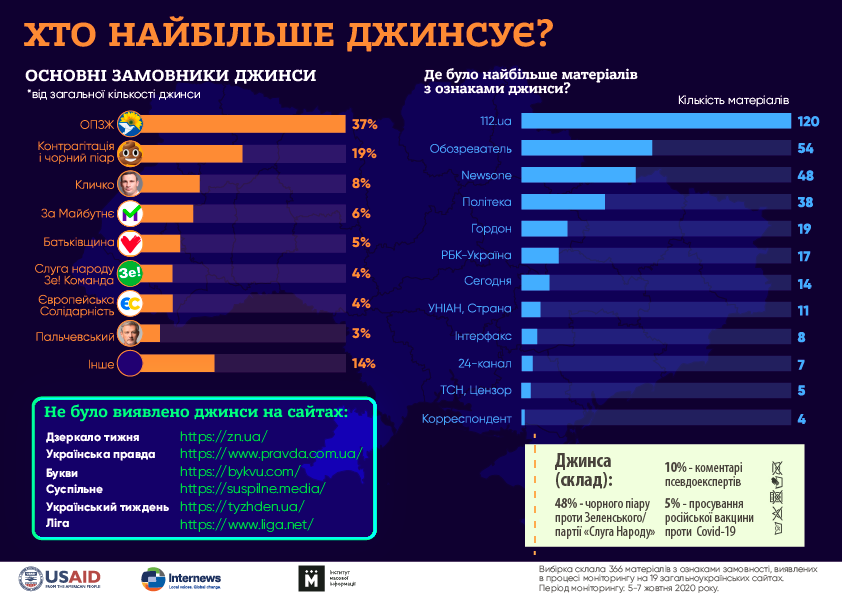 The largest number of stories with signs of order and biased nature was seen on the site 112.ua : 120 news items in just three days of monitoring. By comparison, this is twice as much as was recorded on this site during last year's parliamentary campaign.

The site Obozrevatel come second, in the number of ordered materials (54 content items in three days). Jeansa ordered from a wide range of customers was identified on the site. Moreover, such news are signed by the names of would-be real "journalists".

In third place was another site from the so-called "Medvedchuk's pool" - Newsone, on which our experts identified 48 materials with signs of order.

The full study is available here. The research methodology could be read at the link.