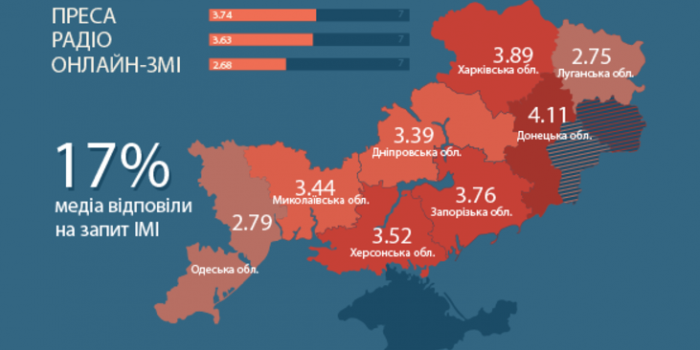 Only 73% of TV and radio companies of the South and East of Ukraine properly published information about their owners and the ownership structure on their websites, which they are obliged to do in compliance with the provisions of section ї) part 1 Article 59 of the Law of Ukraine “On Television and Radio Broadcasting”.

These are the results of the research of ownership transparency of media outlets in Eastern and Southern oblasts of Ukraine conducted by the NGO «Institute of Mass Information» in January-February of 2017. IMI experts analyzed the websites of media outlets (for printed press — the output information of newspaper issues), as well as answers from the editorial offices to IMI’s requests.

Out of printed media outlets, only 23% newspapers in Southern and Eastern oblasts of Ukraine included complete output information. Most lacked these or those items of information specified by the Law of Ukraine "On Printed Media Outlets (Press) in Ukraine", for instance, surnames of the publishing editor, of the editor-in-chief, price per issue, the publisher’s address, etc.

On average, the editorial policies and standards were published only in 14% of the media outlets. In particular, IMI believes “Mykolayiv Center of Journalist Investigations” merits a special mention as in response to IMI’s request it provided a copy of the editorial policy and separately outlined guidelines on journalist ethics, as do “Novosti Donbasa” and “Hromadske Donetska oblast”, which made the editorial guidelines of journalist standards available on their respective websites. At that, only 17% of TV and Radio Companies published their editorial statutes, which must be made public according to part 6 Article 57 of the Law of Ukraine “On Television and Radio Broadcasting”.

Among the oblasts subjected to the monitoring, the situation with transparency of media outlets is best in Donetska oblast and in Kharkiv (4.1 and 3.9 points, respectively, out of 7 possible), and worst in Luhanska oblast and Odeska oblast (each 2.8 points out of 7).

It is worth mentioning that only 32 out of 161 analyzed media outlets sent at least any response to IMI’s request. Newspapers and online media outlets were more cooperative — one in every four editions sent a response, and from TV and radio stations, only one in every ten.

The research was conducted during January-February of 2017 in 8 cities of the South and East of Ukraine — Kharkiv, Dnipro, Zaporizhzhia, Odesa, Mykolayiv, Kherson, Donetska oblast (Kramatorsk, Mariupol), Luhanska oblast (Severodonetsk). IMI experts assessed 161 media outlets as to whether they made available to their audience the information about: their owners, management, contacts, size of the audience, the media outlet’s editorial policy and financial information about the media outlet. In more detail, the methodology research is presented on the IMI website.

The research was conducted by the NGO “Institute of Mass Information” supported by the Ukrainian Confidence Building Initiative (UCBI), financed by the United States Agency for International Development (USAID).

Police did not yet found killer of Cherkasy journalist Vadym Komarov

Biden apologizes after losing temper while addressing CNN's Kaitlan Collins: 'I shouldn't have been such a wise guy' - CNN
Blogs
Sanctions against Medvedchuk’s TV channels. The first estimates
Want to learn first about the new research of the Institute of Mass Media? Subscribe to the newsletter!