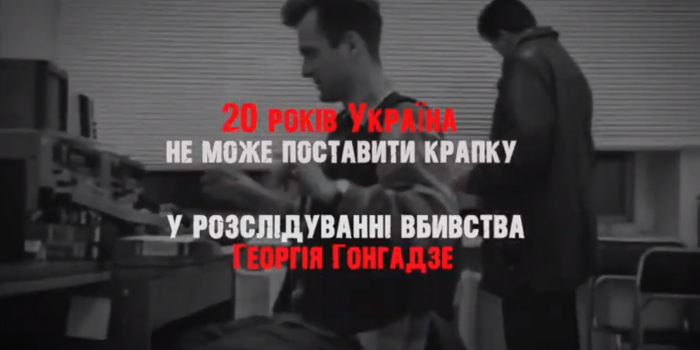 Photo credit: Screenshot from the video of UA:Pershyy

On September 16, at 9:40 p.m., the first run of the documentary “Murder of Gongadze. 20 years in search of the truth” is going to be aired by the “UA:Pershyy”. This is said on Facebook and on the channel "UA: Pershyy" on YouTube, as “Suspilne. Detektor Media” reported.

On September 17 at 19:30 this film will be aired in Mariinsky Park on the summer stage "Mushlya" near "Dynamo" stadium.

The film was made by Maksym Kamenev, Nataliya Humeniuk and Anna Tsyhyma.

On September 16, 2000, Georgy Gongadze was abducted. He was brutally killed by the law enforcement officers. Although the perpetrators were convicted, 20 years later the official investigation did not identify the instigators of that crime.

"In 20 years, generations have grown up who no longer remember the days of Kuchma's rule or the conditions in which the media worked at the time. 20 years later, the questions remain unanswered. In the film they are raised, but also answered by well-known journalists who tried to investigate the Gongadze case, as well as Georgy's relatives and friends: Olena Prytula, Yevhen Hlibovytsky, Lavrentiy Malazonia, Oleg Yeltsov, Yulia Mostova, Serhiy Rachmanin, Mustafa Nayem, Serhiy Leshchenko, Oleksiy Stepura, Valery Kalnysh, Sevgil Musayeva, Koba Alania, Myroslava Gongadze, ” the press release read.

The project is made with the support of Public Broadcasting (NPTU), Internews, the Embassy of the Kingdom of the Netherlands in Ukraine, CFI Media Development, the European Commission, Rebecca Harms and the Media Development Fund of the US Embassy in Ukraine.