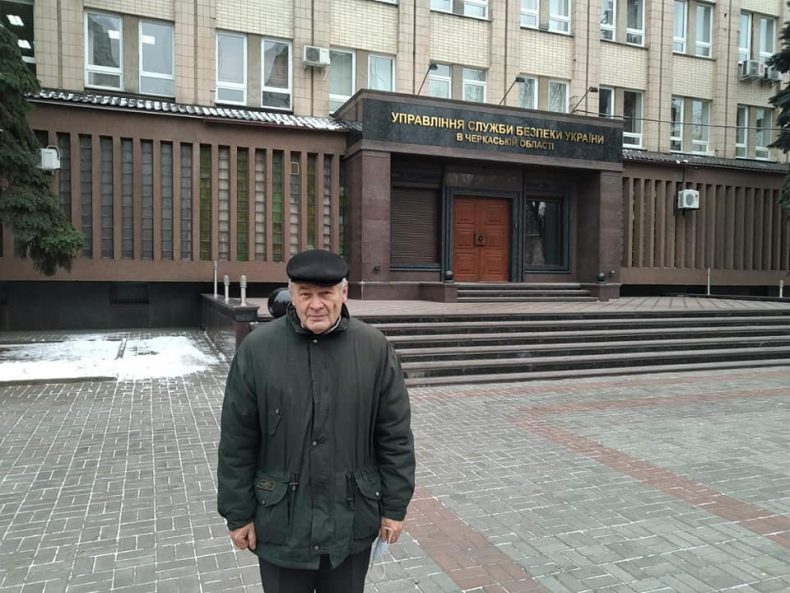 In Chyhyryn, Cherkasy region, Volodymyr Tereshchenko, 80, is charged with suspicion of actions aimed at overthrowing the constitutional order through a Facebook post. Volodymyr Tereshchenko got the suspicion on December 10, he faces up to three years in prison and confiscation of property, as Ukrainian Helsinki Human Rights Union and Channel 5 reported.

The man wrote the post in 2018, the massage was accompanied with a picture with a Maxim machine gun and a curse. In a Facebook post shared by Volodymyr, there were words about villains in power, about the stadium where they should be gathered, and about the shooting. Two years ago, the post gained two and a half thousand hits.

In October, the pensioner was declared a suspect for an attempt to overthrow of the state system, and SBU officers came to search his place of residence. According to Channel 5, the SBU investigation did not mention the author of the post or other users who shared it or commented on it.

SBU officers discovered the man's post during the usual monitoring of social networks. The service has already completed the investigation and transferred the case to the prosecutor's office. They say they are preparing for court.

Volodymyr Tereshchenko denied the accusation: "Nowhere have I taken a radical or separatist position against the government, what is more against the Constitution."

The lawyer of the Cherkasy reception of UHHRU Lyudmyla Herashchenko said that the information was entered into the national register of pre-trials investigations a year ago, then an examination was conducted. The picture was analyzed by an SBU expert with a degree in philology. And according to the results of the examination, the lawyer added, it was determined that the words in the picture testified to a call for the overthrow of the government, which is Article 109 of the Criminal Code.

According to Lyudmila Herashchenko, the post is no longer relevant.

In addition, the lawyer concluded from the text of the suspicion that Volodymyr Tereshchenko was recorded as a member of radical movements that aim to change the country's power by force. But Lyudmyla Herashchenko saw no evidence that he aimed to overthrow the constitutional order.

"Volodymyr Tereshchenko has an active civil position, fights for ecology and justice, but he does not pick up a machine gun or manurer fork and does not go to overthrow the government. The investigation did not provide any evidence of this, ”Tereshchenko's lawyer said.

At present, the case is to be sent to the court in Chyhyryn and the first preparatory hearing is scheduled.

Volodymyr Tereshchenko, 80, worked as a geography teacher for more than 40 years, developed a scientific society in the city, and opposed the construction of a poultry farm and the felling of trees in the Black Forest and the local park. He also demanded that the city of Chyhyryn be granted the status of hetman's capital.