The self-proclaimed governor of Zaporizhzhia oblast, Yevhen Balytsky, sometimes publishes his "orders" with a fake seal depicting the Zaporizhzhia oblast symbols, stolen from Ukraine by the occupiers. This is reported by the fact-checkers of the project Perevireno.Zaporizhzhia, which is being published on 061.ua website.

According to the project, it also contains an OKPO code (the russian equivalent of the EDPNOU), which completely coincides with the EDPNOU of the Zaporizhia Regional Military Administration. Thus, the collaborators stole not only the symbols of the Zaporozhzhia authorities, but also their ID code. "This only emphasizes the fakeness of the authority which the collaborators attribute to themselves, because neither the 'Military-Civilian Administration of the Zaporizhzhia Oblast' nor any organization with such an OKPO is to be found in the russian legal entity registers," stated the Perevireno.Zaporizhzhia project.

To further clarify what we mean, we are publishing Balytsky's June 23 "order" on the hryvnia exchange rate. 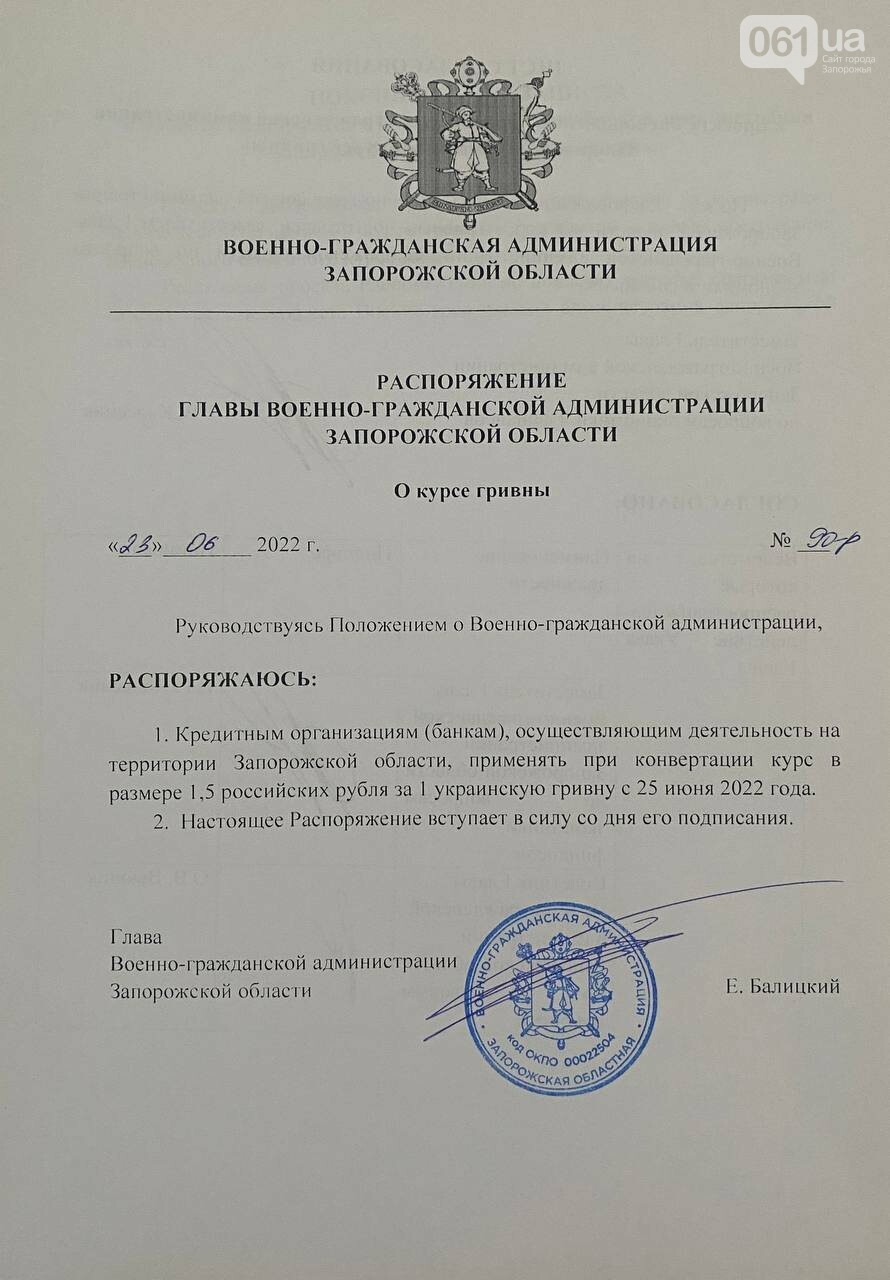 The "document's" header and the "seal" depict the Zaporizhzhia oblast coat of arms. It was approved by Zaporizhzhia Regional Council on July 27, 2001.

The coat of arms, known to the Zaporizhzhians, is made with gold and glaze. A Cossack with a saber on his left side and a rifle on his left shoulder on a crimson field. The kleynods – symbols from the Cossack era – indicate that the Zaporizhzhia land has inherited the principles of democracy that were characteristic of the Zaporizhzhia Sich. The mace symbolizes the power of the President – the head of state, the guarantor of state sovereignty and territorial integrity of Ukraine. The pernach symbolizes the local executive power, the bunchuk stands for the cooperation between all branches of government in the oblast, and the timpani are a symbol of the people's will.

Now, all these symbols can be seen on the "documents" of the occupiers. 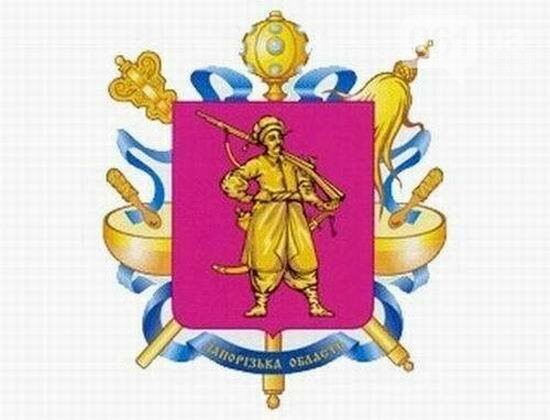 Perevireno.Zaporizhzhia project asked the director of the culture and information policy department of the ZRMA Vladyslav Moroko for a comment. The official explained why the occupiers' seal is fake and why they had stolen Ukrainian symbols.

"The seals of the occupiers are fake. They have no legal weight, since there is only one Zaporizhia regional military administration in Zaporizhzhia oblast, and it is located in the city of Zaporizhzhia. The occupiers are doing all they can to show that they exist, that they operate within the legal field, but russia is a fake of a modern country that is trying to be something that it is not. They (the occupying power. – Ed.) try to use the authentic symbols of this or that territory to make people think that they have legitimacy. So far, they have adopted a coat of arms that is similar to the coat of arms of Zaporizhzhia oblast, but it is clear that legally there is no Zaporizhzhia occupation administration. There is only the russian invader army, which has occupied the territories," said Moroko.

He also explained that initially, the occupying power used the coat of arms of Oleksandrivsk (which was the name of Zaporizhzhia until 1921), but the people did not respond to that symbol.

"They started mimicking us, trying to be similar to the Ukrainian authorities. However, their seals and documents are not legal and cannot justify any of their actions," the official added.

According to Moroko, all the actions of the occupiers, namely the appropriation of state symbols, will be studied by law enforcement agencies, who will record and investigate the crimes of the occupying russian troops after the de-occupation of the territory.

The project is being implemented by the NGO "Institute of Mass Information" and 061 and is financed by the Thomson Reuters Foundation within the framework of the program to support independent mass media in the Eastern Partnership countries with the assistance of the Foreign and Commonwealth Office of the United Kingdom.