Number of journalists in arbitrary detention surges 20% to 488, including 60 women - RSF 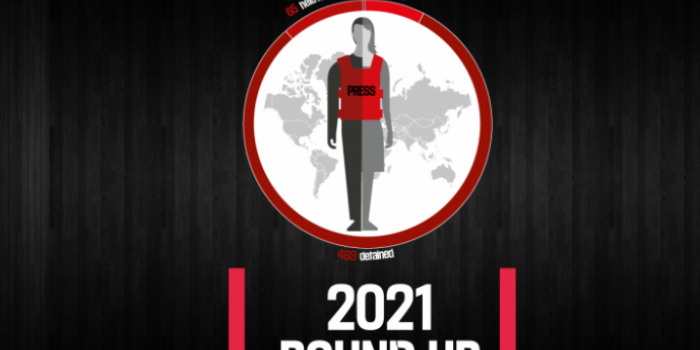 rsf.org
A record number of journalists – 488, including 60 women – are currently detained worldwide, while another 65 are being held hostage. Meanwhile, the number of journalists killed in 2021 – 46 – is at its lowest in 20 years. This is said in the annual report by the Reporters sans frontières (RSF).

The number of journalists detained in connection with their work has never been this high since RSF began publishing its annual round-up in 1995. RSF logged a total of 488 journalists and media workers in prison in mid-December 2021, or 20% more than at the same time last year.

This exceptional surge in arbitrary detention is due, above all, to three countries – Myanmar, where the military retook power in a coup on 1 February 2021, Belarus, which has seen a major crackdown since Alexander Lukashenko’s disputed reelection in August 2020, and Xi Jinping’s China, which is tightening its grip on Hong Kong, the special administrative region once seen as a regional model of respect for press freedom.

RSF has also never previously registered so many female journalists in prison, with a total of 60 currently detained in connection with their work – a third (33%) more than at this time last year. China, the world’s biggest jailer of journalists for the fifth year running, is also the biggest jailer of female journalists, with 19 currently detained. They include Zhang Zhan, a 2021 RSF Press Freedom laureate, who is now critically ill.

Belarus is currently holding more female journalists (17) than male (15). They include two reporters for the Poland-based independent Belarusian TV channel Belsat  – Daria Chultsova and Katsiaryna Andreyeva – who were sentenced to two years in a prison camp for providing live coverage of an unauthorised demonstration. Of the 53 journalists and media workers detained in Myanmar, nine are women.

“The extremely high number of journalists in arbitrary detention is the work of three dictatorial regimes,” RSF secretary-general Christophe Deloire said. “It is a reflection of the reinforcement of dictatorial power worldwide, an accumulation of crises, and the lack of any scruples on the part of these regimes. It may also be the result of new geopolitical power relationships in which authoritarian regimes are not being subjected to enough pressure to curb their crackdowns.”

Another striking feature of this year’s round-up is the fall in the number of journalists killed in connection with their work – 46 from 1 January to 1 December 2021.  You have to go back to 2003 to find another year with fewer than 50 journalists killed. This year’s fall is mostly due to a decline in the intensity of conflicts in Syria, Iraq and Yemen and to campaigning by press freedom organisations, including RSF, for the implementation of international and national mechanisms aimed at protecting journalists.

In addition to these figures, the 2021 round-up also mentions some of the year’s most striking cases. This year’s longest prison sentence, 15 years, was handed down to both  Ali Aboluhom in Saudi Arabia and Pham Chi Dung in Vietnam. The longest and most Kafkaesque trials are being inflicted on Amadou Vamoulké in Cameroon and Ali Anouzla in Morocco. The oldest detained journalists are Jimmy Lai in Hong Kong and Kayvan Samimi Behbahani in Iran, who are 74 and 73 years old. The French journalist Olivier Dubois was the only foreign journalist to be abducted this year. He has been held hostage in Mali since 8 April.

Since 1995, Reporters Without Borders (RSF) has been compiling annual round-ups of violence and abuses against journalists based on precise data gathered from 1 January to 1 December of the year in question. The 2021 round-up figures include professional journalists, non-professional journalists and media workers. We gather detailed information that allows us to affirm with certainty or a great deal of confidence that the detention, abduction, disappearance or death of each journalist was a direct result of their journalistic work. Our methodology may explain differences between our figures and those of other organisations.