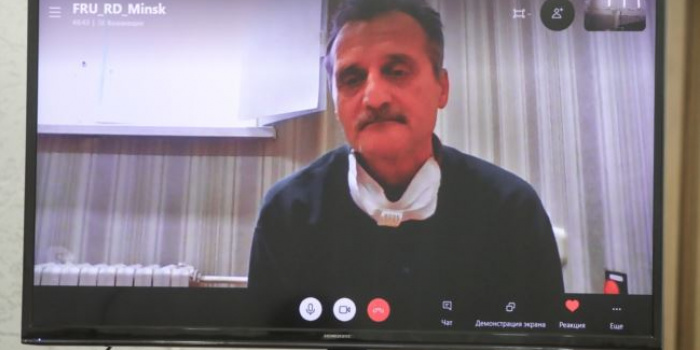 Noted Belarusian journalist Aleh Hruzdzilovich has been sentenced to 15 days in jail over covering one of the ongoing mass rallies demanding Alyaksandr Lukashenka's resignation, as Radio Free Europe/Radio Liberty reported.

Judge Maryna Yarokhina of the Frunze district court in Minsk on November 12 found the 61-year-old journalist and former RFE/RL correspondent guilty of taking part in an unsanctioned mass gathering on October 25, and ordered him jailed for 15 days.

Hruzdzilovich pleaded not guilty, insisting that he was covering the rally as a reporter for the Narodnaya Volya (People's Will) newspaper. According to him, he had a vest with "press" written on it and his journalist identification documents with him at the rally.

However, Hruzdzilovich was found guilty and joined 15 other journalists who are serving administrative arrests over covering the ongoing rallies that erupted after August 9 presidential poll that election officials said was won by Lukashenka, while tens of thousands of protesters have insisted that the election was rigged.

Hruzdzilovich is one of Belarus's most well-known journalists.

He has since been working with independent media outlets of the country.

There have been protests almost daily against Lukashenka in Minsk and elsewhere in the country since an August 9 presidential election that protesters alleged was rigged and that Western countries have refused to accept.

Lukashenka has directed a brutal postelection crackdown that has included thousands of arrests, beatings, and other mistreatment of peaceful protesters, as well as expulsions of foreign journalists.

On November 4, European Union member states agreed to slap sanctions on Lukashenka, along with 14 other Belarusian officials, in response to the crackdown.