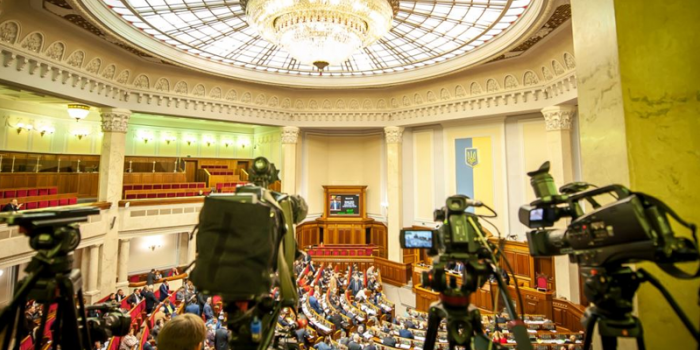 The employees of sanctioned TV channels “112 Ukraina”, NewsOne and ZIK fail to be conform to the requirements for press accreditation in the Verkhovna Rada. The IMI lawyer Ali Safarov said it, commenting on the initiative of MP Iryna Friz to adopt a resolution to suspend the accreditation of employees of these TV channels in the parliament.

Ali Safarov said that, in accordance with the decision of the National Security and Defense Council of February 2, approved by Presidential Decree 43/2021, these TV channels were not considered anymore as TV channels, as its broadcasting licenses of these were terminated from the moment the decree entered into force.

But  the lawyer said, it was not clear how exactly they wanted to terminate the accreditation of ZIK, NewsOne and 112 Ukraine, as the provision governing accreditation in parliament did not stipulate its revocation due to the termination of activities.

“In fact, there are currently no legal grounds for admitting these persons to the premises of the Verkhovna Rada of Ukraine. However, paragraph 19 of the provision does not stipulate the deprivation of accreditation due to the termination of activity of mass media. So it is difficult for me to say exactly how the termination of accreditation of employees of legal entities that have been subject to sanctions will be articulated, ”Ali Safarov said.

As IMI reported, As IMI reported, on February 2, the head of state enacted the decision of the National Security and Defense Council of February 2, 2021 "On the application of personal special economic and other restrictive measures (sanctions)", which provides for the introduction of sanctions against the people for five years MP Taras Kozak and legal entities licensed by 112 Ukraine, NewsOne and ZIK TV channels.

On February 3, the United States supported Ukraine's sanctions against Russia.

On February 3, a number of NGOs and experts explained that sanctions against Medvedchuk's TV channels - 112 Ukraine, NewsOne and ZIK - did not pose threat to freedom of speech, as these channels were instruments of foreign influence and posed a systemic threat to Ukraine's information security.

A number of Ukrainian media organizations declared that suspending of Ukraine TV channels related to Viktor Medvedchuk was a matter of security, not freedom of speech. This is said in a statement signed by media organizations on sanctions against Medvedchuk's ally Taras Kozak and his channels 112 Ukraine, NewsOne and ZIK, as “Detector Media” reported.

Later on, on 6 February, Media Movement supported sanctions against Medvedchuk’s TV channels and urged not to persecute its employees. “We, members of the Media Movement, consider the sanctions targeting the owner of the so-called Medvedchuk’s TV channels as an adequate measure to fight against misinformation. (…) At the same time, we oppose any "blacklists" to be composed with the names of employees of the TV channels that have come under sanctions. Calls for violence from either side must entail an immediate reply from law enforcement.

We urge ordinary employees of these three TV channels, who did not directly participate in the manipulations and do not share the views of pro-Russian owners, to fight for their labor rights, dignity and independence. We also urge the Ukrainian media not to limit the employment opportunities of former ordinary employees of these TV channels, who did not share the views of the owners of the channels and are ready to sign the Code of Journalistic Ethics and adhere to it”, they said in the statement.